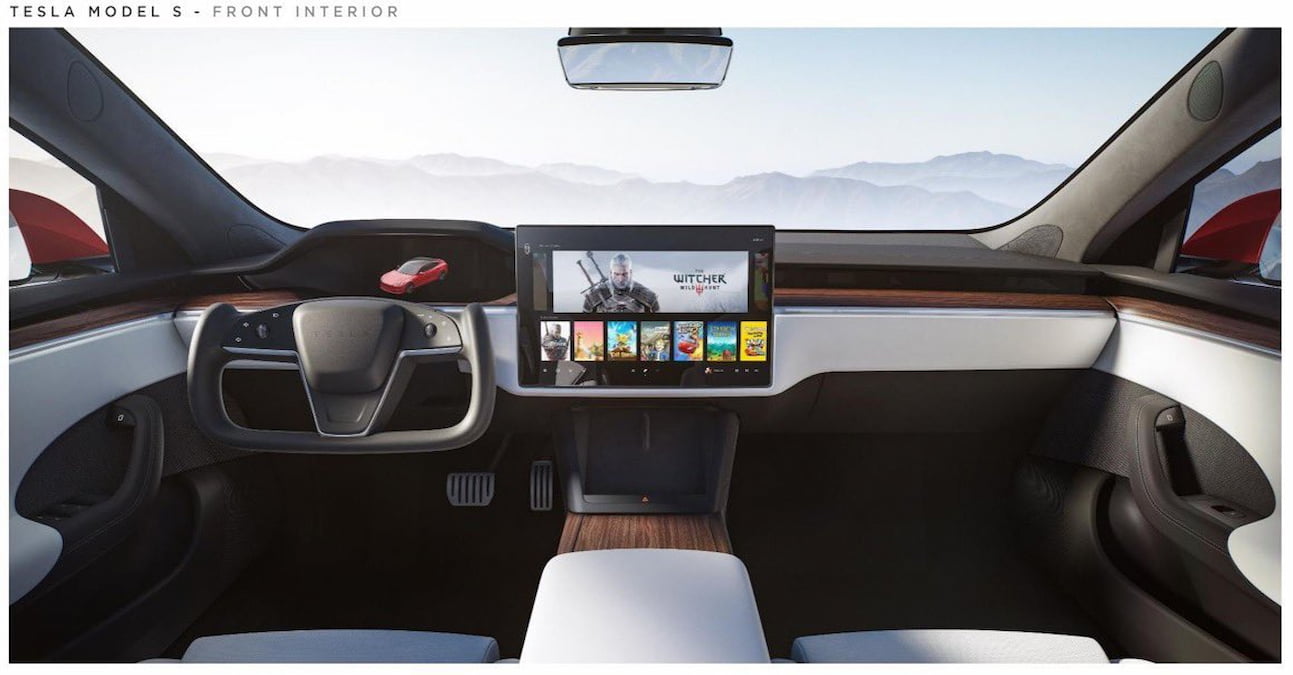 A Tesla Model S facelift is being released next month as we eagerly await the Tesla India launch. This is the second major intervention for the Tesla Model S since its debut in 2013 as competition in the form of the Lucid Air and the Mercedes EQE is intensifying.

The 2021 Tesla Model S is about addressing the most concerning aspect of the world’s first premium all-electric sedan developed from the ground up – the car’s interior. While the previous facelift cleaned up the exterior of the Tesla Model S in a subtle manner, this refresh endows it with a completely different interior.

Everything from the dashboard to the steering wheel to the centre console, floor tunnel, door panels, instrument cluster, and steering is renewed. Tesla has been known for changing the traditional product update cycles in the auto industry successfully, and the 2021 Model S proves that yet again.

One of the talking points of the Tesla Model S 2021 interior is the all-new Roadster-inspired, yoke-style steering. Along with the new low-profile but rich-looking dashboard and the seamlessly integrated new, 12.3-inch digital instrument cluster. Tesla’s intention was perhaps giving the 2021 Model S drivers a little bit of a sci-fi feeling of driving a truly futuristic car until it has a spaceship ready for flying to Mars that gives the whole experience!

The AC vents, unlike in the old model, haven’t been made visible, and that contributes to the increased minimalist appearance. The new, 17-inch touchscreen display has a landscape orientation (2200 x 1300 px) instead of portrait orientation, and unlike the old model’s unit, it doesn’t feel out of place.

The driver and front passenger can put their phones in the storage area in a slanted position such that notifications are easily visible without having to reach and pick them up. The surface of the mobile phone box has a wireless charger built-in. USB-C charging is also available in the car.

Tesla has redesigned the second row, and so, the new Model S 2021 offers extra legroom and headroom. Also new for the rear-seat passengers is an infotainment system that allows playing the built-in games and a stowable armrest with integrated storage and wireless charging.

The 2021 Tesla Model S has a new infotainment system that allows the occupants to play Cyberpunk 2077 (and even The Witcher 3) in the car! Getting a PlayStation fitted into a car from a custom shop is truly a thing of the past now. With 10 teraflops of processing power available to unleash, the gaming performance should be close to the PlayStation 5 (10.28 teraflops)! Rear-seat passengers are also covered this time, thanks to a new dedicated display placed between the front seatbacks.

There’s more to the 2021 Tesla Model S than the whole new interior. It’s way more confidence-inspiring to drive on long trips, thanks to a new Plaid+ variant. The variant line-up is Long Range, Plaid, and Plaid+ instead of Long Range Plus, Performance, and Plaid. Apparently, the Plaid variant announced in September wasn’t good enough for Tesla to address its customers with range anxiety. The Tesla Model Plaid+ can deliver a range of more than 840 km! Also, it’s comparatively a little quicker, although its top speed is the same. Check out the specification in the table below to know more:

The Tesla Model S has proved to be an exemplar of how immensely electric cars can be improved over their lifecycle and thus have a much longer shelf life. Expect it to be launched in our market later this year, and with that it won’t be an elite few who are Tesla Model S owners in India.