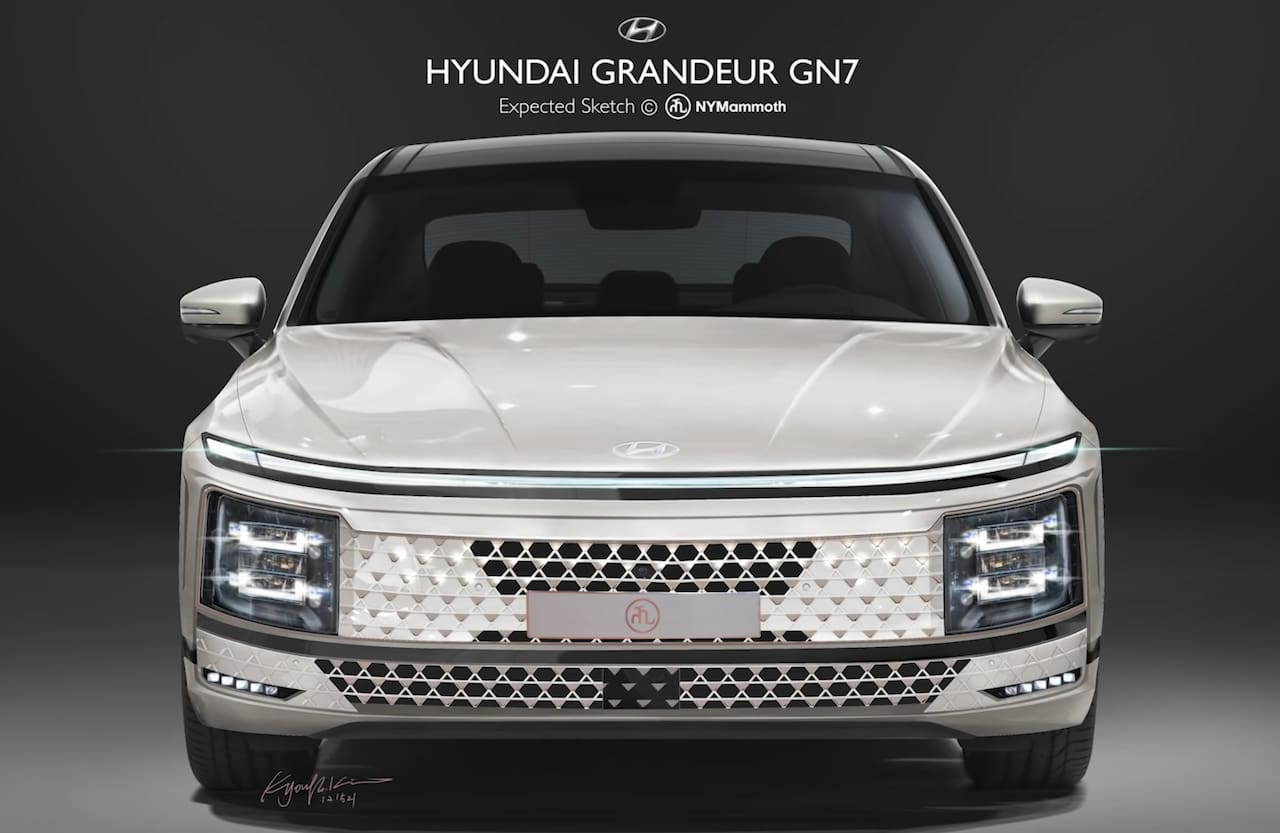 The next-generation 2022 Hyundai Grandeur arriving later this year is expected as a significant step up from the current-gen model to maintain its positioning as the flagship Hyundai model.

While the Hyundai Grandeur is currently the flagship, its past has been overshadowed by the Genesis G80 from 2016. The Grandeur occupied a straddling position of a high-end Hyundai, slotting between the Sonata and G80. Hyundai can refocus on the Grandeur with Genesis products being woven into their brand and migrating to dedicated dealerships. In addition, Korean Car Blog reports that the 7th gen Grandeur will see a retro-design all electric variant with design highlights from the Grandeur Heritage EV concept.

The rendered 2022 Hyundai Grandeur (above) will be a significant departure from the current generation model. The front-end is inspired by the Hyundai Staria, and overall, the sedan seems to have impressive road presence.

The Grandeur EV with its retro design is expected to receive an old school rear quarter glass panel, and spyshots have shown prototypes with this design feature too. We also see the taillights of the new Hyundai Grandeur EV with a retro look, but complemented with LEDs. In addition, a full width light bar (Welcome Light) and Pixel LEDs are expected at the front to give the sedan an unmissable appearance.

The upcoming seventh-generation Hyundai Grandeur (codenamed Hyundai GN7) will reportedly exceed the 5-meter mark in length, a first in the nameplate’s 35-year history. The Grandeur is currently sold in chauffeur-driven markets like China, the Middle East, the home market – South Korea, and select South East Asian countries. Sales have been on the uptick, with over 2 million units sold since its launch in 1986, and for 2021, the Grandeur was the best-selling car in South Korea for the fifth consecutive year. The sedan is standing firm despite the heavy incoming fire from crossovers that have literally conquered every segment.

ElectricVehicleWeb accessed an official document of Hyundai Motor Company from March 2021, which confirms the new Grandeur and Grandeur Hybrid model plan for 2022.

With every redesign, the Grandeur’s appeal has broadened, and the target age group gets younger. We don’t see this changing in the next generation, which is expected to pack some of the Palisade’s features. These include the VIP package with wing-type headrests with built-in Harmon Kardon speakers for the rear occupants, rear entertainment screen, temperature-controlled cupholders, a 12.3-inch virtual cockpit, air purifier, a color head-up display, and the Safe Exit Assist which uses radar to detect traffic approaching from the rear and alerts the passenger opening the rear door.

Hyundai could offer an ultra luxurious variant of the Grandeur with individual rear seats with electric adjustments and a leg rest, foldable working tables and a mini fridge. Such a variant could offer stiff competition to German rivals in the same dimensional category such as the Mercedes E-Class and the Audi A6.

‘Le Blanc’ in French means ‘white,’ and a new combination of beige (seat) and black was added to the Grandeur’s cabin trim for a distinct appearance last year. Spy shots show a similar combination used on prototypes of the next-gen Grandeur.

The 2022 Hyundai Grandeur Hybrid could see a more potent 2.0-liter version of the Sonata Hybrid’s unit, or perhaps even a turbocharged unit. The latter could come from the Kia K8 which uses a 1.6-liter turbo hybrid powertrain with a 180 PS gasoline engine and a 59 PS electric motor.

As for the Hyundai Grandeur EV, the company has been tight lipped about this product. While Hyundai could opt to use its E-GMP platform, this seems unlikely for the upcoming model; maybe the future generation from the second half of this decade could utilize an electric-specific architecture.

The Grandeur EV may launch as an AWD sedan with two motors, together generating around 270 kW of power and 700 Nm of torque. The Grandeur EV could have an 87.2 kWh battery pack with a multi-charging system that supports ultra-fast charging. The range per the South Korea certification method could be between 400-450 km (249-280 miles).

Despite the semiconductor chip shortage and SUVs gaining popularity, 2021 was a successful year for the Hyundai Grandeur in South Korea. A report by mk.co.kr on January 3, 2022, states that the Grandeur was the highest-selling car for the 5th consecutive year in the local market. In 2021, Hyundai sold 89,084 units of the Grandeur on its home turf.

What are the rivals of the Hyundai Grandeur?

If launched in the U.S., main rivals to-be are the VW Arteon and the Nissan Maxima. In S.Korea, it is the Kia K8.

What is the release date of the new Hyundai Grandeur?

The next-gen Grandeur will be launched this year, a few months after its premiere/digital unveiling.

What is the expected price of the 2022 Hyundai Grandeur?

Prices for the next gen Grandeur are expected from 33 million Won (around USD 28,500) in S.Korea.