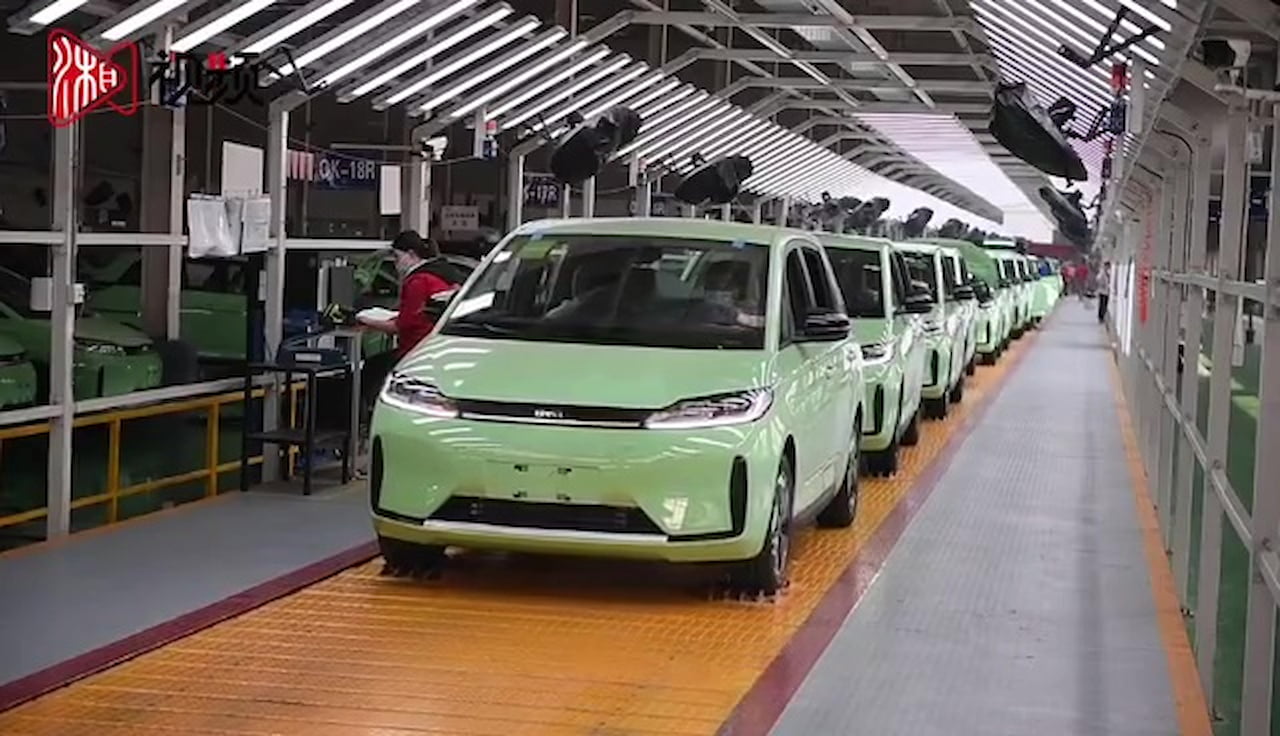 Update: Changsha Yuhua Economic Development Zone has announced on Weibo that nearly 400 units of the BYD D1 are rolling off the assembly line every day. The Chinese VW ID.3 clone is manufactured in a standard green colour. In December last year, Mobile Energy Global’s Qingdao Medici ordered 2,000 units of the BYD D1 and said that the deliveries of the new Chinese electric car are scheduled to begin in the first half of this year. You can see how the BYD D1 looks in person in the video embedded below:

BYD is one of the many Chinese automakers that have made front page headlines for creating imitation goods on four wheels. You might remember it from drawing “inspiration” from the Mercedes-Benz CLK (BYD S8) and the Lexus RX (BYD S7) in the past. While in recent years the company has received positive praise for creating refreshing originals such as the BYD Han, the BYD D1 which was unveiled this month appears to be a regressive design step.

Auto Bild, Germany’s leading automobile publication, did a piece on the BYD D1 to share its opinion though it’s strictly a China-only model, because of the high design and technical similarities to the VW ID.3. It said (translated):

Handelsblatt, a reputed German paper, also ran a story to point on the BYD D1. In addition to calling the BYD D1 a “shameless copy” due to a number of design elements making it reminiscent of the VW ID.3, it suggested that Volkswagen could take a legal action. It said (translated):

Volkswagen wants to examine the matter, it was said in Wolfsburg.

The VW ID.3 is Volkswagen Group’s novel electric car that is seen as the next Volkswagen brand icon after the VW Golf, which was preceded by the VW Beetle. It is shocking to the German media how Chinese automakers are unabashedly ignoring copyright and stealing global car designs even today, and at the same time trying to expand their footprint on the world map. The controversial D1 comes just months after the BYD Han – the so-called BYD Tesla Model S rival – debuted in Europe on 13 May 2020.

BYD D1 – Exclusively made for ridesharing

The BYD D1 has been developed only for sale to DiDi (China’s Uber alternative) for ride-sharing. It has proportions very similar to those of the funky yet smart-looking VW ID.3. Commentary in the German media and blogs opine that the windscreens, pillars and greenhouse look very similar to those of the German compact electric car, and even the signature “Sanya” alloy wheels has not been spared.

The BYD D1 uses a single electric motor that generates 100 kW of power and 180 Nm of torque. It has a 54 kWh battery pack that gives it a range (NEDC) of 418 km. The Chinese electric car, which is meant to be used by ride-sharing service, can achieve a top speed of 130 km/h. It is scheduled to be put into operation this month, first in Changsha, Hunan province.