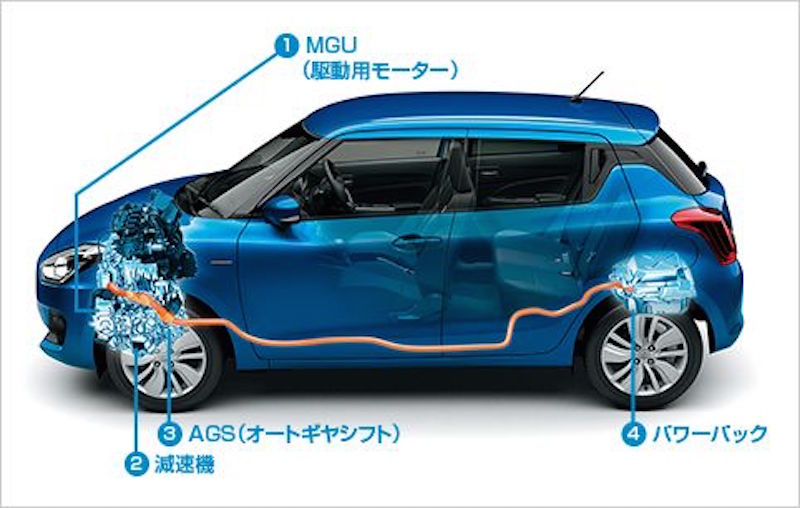 Maruti Suzuki has confirmed that it will display the Japanese-spec Swift with a Hybrid system at the Auto Expo 2020.

Just weeks ago Suzuki announced that it will launch the new 48-volt self-charging hybrid (the latest development of the SHVS) from March 2020 which will replace the current 12V SHVS (available in India on Ertiga, S-Cross and Ciaz) in global markets. Suzuki has stated that it will be rolling out the improved hybrid system on the S-Cross, Ignis, Vitara and Swift Sport. Combining a 48V lithium-ion battery, Integrated Starter Generator and 48V-12V (DC/DC) converter, the new hybrid setup weighs just 15 kg and offers an additional torque totalling to 235 Nm that is available from 2,000 rpm and a 15 percent improvement in the mileage.

Since 2017, Suzuki sells a ‘strong’ hybrid version of the new Swift for the Japanese market which combines a Motor Generator Unit (MGU) to an Auto Gear Shift (AGS), and this is the version to be presented at the Auto Expo. It is powered by a 91 PS 1.2L 4-cyl petrol engine married to a 10 kW/30 Nm Motor Generator Unit and a 5-speed AGS (AMT). Unlike the SHVS, the Suzuki Swift Hybrid can operate in petrol and electric modes, and offers an exceptional fuel economy of 32 kmpl in the Japanese driving cycle.

The Maruti Swift hybrid to be shown at the Auto Expo is to get audience feedback for a new top-end Swift variant as well as display MSIL’s strategy of gradually shifting to hybrid technology to meet future emission norms and launch more fuel efficient products.

Maruti has not listed all the names of the 17 products heading to the Auto Expo. EVW can reveal that the Jimny is part of the group.

The new-gen Suzuki Jimny is a capable off-roader and is a complete SUV package that launched in July 2018 (official video embedded below). It rides on a ladder-frame chassis, making it suitable for every kind of terrain. Strengthening its off-roader characteristics, Jimny gets a 3-link rigid axle suspension with coil spring and part-time 4WD with low range transfer gear. The 4WD system can be toggled between 2H (2WD-high gear), 4H (4WD-high gear) and 4L (4WD-low gear) modes by a shift lever directly connected to the transfer gear. The 4L mode helps in better traction on rough terrain by transferring more torque to the tyres while in lower gears.

The new Jimny features a 1.5-litre petrol engine, which is smaller in overall dimensions than the 1.3-litre unit it replaces, and 15% reduced weight. The engine comes mated with either a 5-speed manual transmission or a 4-speed automatic transmission. There is no diesel or hybrid option for the Jimny.

The Jimny also became the first model to be equipped with Suzuki’s preventative safety technology, Suzuki Safety Support. With the support of Dual Sensor Brake Support (DSBS), the system issues audio and visual warning to the driver in case it guesses a risk of collision with a forward vehicle or pedestrian. The system either increases braking force or applies strong automatic brakes to avoid the collision or reduce damage. Other functions of this kit include lane departure warning and weaving alert function, high beam assist and traffic sign recognition.

There have been contradictory reports on the launch of the Jimny, with some claiming that it has been approved and would be positioned beneath the next-gen Vitara Brezza, while others reporting that the lack of rear doors has made it infeasible for the Indian market. A ‘long-body’ Jimny with the extra doors is not entirely out of question to bring back the iconic ‘Gypsy’ nameplate, but what Maruti will be looking to achieve in the first week of February is measuring the Indian public’s excitement level for a Suzuki off-roader.