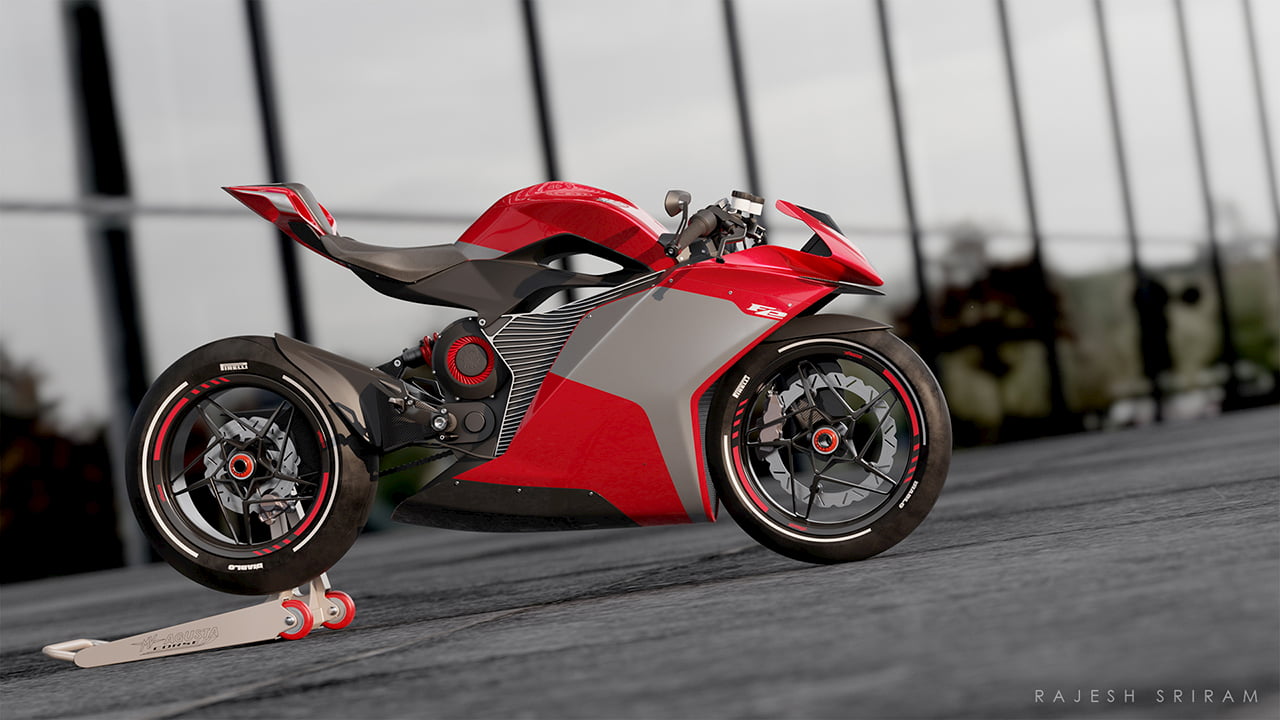 Rajesh Sriram, a 33-year-old transportation designer, who completed his Master’s degree from NID, has imagined the MV Agusta as an electric motorcycle. We caught up with Sriram to learn about his idea:

What was the inspiration?

MV Agusta is one of my favourite brands of motorcycle and they are like art in terms of automobile. Sadly, I think their supersport versions are not really updated but they still look stunning. The designs carry on with minor upgrades, so I thought of an electric version with the same DNA, with the same design cues of MV. If you see, the overall proportions of the supersport segment have changed completely but MV is still the same and they don’t have a new platform yet.

How did you differentiate between the regular MV bikes and the electric version?

When I started with the sketches, I proceeded with the current platform but I changed the proportions in a modern sense. Normally, if you see the current MV Supersport bikes, like the F4 is quite old; F3 is still relatively new but not a completely different platform. They have long rear overhangs, which are not found on many superbikes anymore; they have short tails and very short overhangs or no overhangs at all. They are all much more compact in proportions whereas MVs are old-school. They have their own charm but if you compare with Ducati 1098, it has moved on and its proportions have changed completely.

I have tried to retain the more recent proportions and in terms of curves, I tried to retain the ‘MV’ness wherever I can. If you see in surfaces also, it is very flowing and doesn’t feel edgy but again here the challenge is to balance it. If MV is making an electric bike, it may not look the same as probably a petrol version because the current trend for electric vehicles is that they try to portray themselves as clean surfaces. Even in terms of design, they are very minimal and I have to really balance it out. If you see the front, you can obviously identify it from the typical MV-type diamond headlamps and the tail, they haven’t changed it in a really long time. I had to integrate a short tail. I have planned to make a more track-focused version of it, so as a first step I added winglets to it. There is a small splitter in the front below the headlamps, which differentiates from the current models.

The MV Agusta FE RC is a track focused version of the FE. It has upgraded components like Carbon composite brakes, wheel/brake shroud and vent to maintain the brake temperature, carbon fiber parts, integrated wings to improve the aerodynamic performance and the whole package dressed in MV Agusta Reparto Corse livery.

Bennetts Bike Social caught up with Timur Sardarov, the head of MV Agusta who has given details about its electric motorcycle plans for the first time. Sardarov says MV Agusta would work on electric motorcycles instead of trying to save the combustion engine. He confirms that MV commuter bikes with electric propulsion are on their way in 2-3 years. The company would also launch high-performance models that are electrified.

MV Agusta will relaunch in India with a new distributor, the CEO has already said earlier this year.

You can read the full interaction at Bennetts.co.uk.