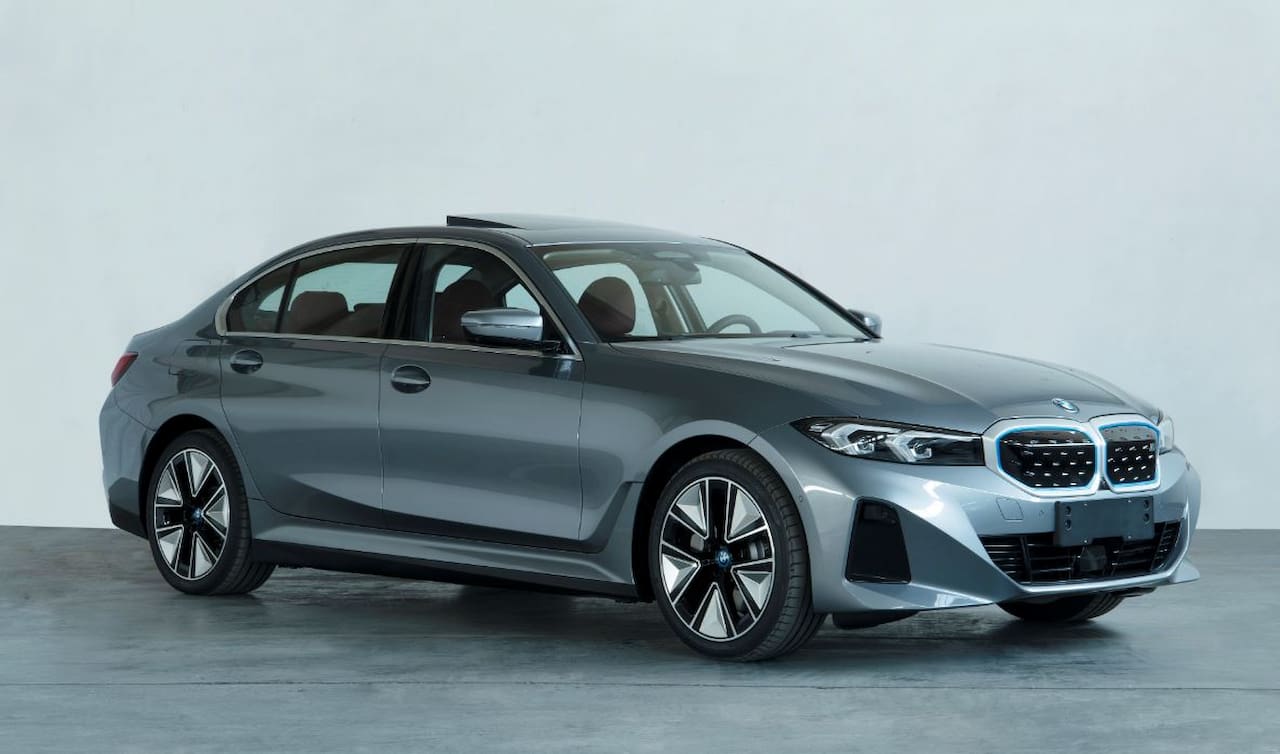 Following the i4 and the iX, BMW has confirmed the launches of the i7 and 3 Series Electric. Real-life images of the new model from China’s MIIT have revealed the exterior and confirmed its name as well – the BMW i3. Apparently, BMW Group is reusing the title of its hatchback for its first-ever pure-electric sedan.

BMW is developing the 3 Series Electric based on the long-wheelbase 3 Series (3 Series Li) specification that is sold in China. BMW has used the design of the upcoming 3 Series facelift on the EV variant. The headlamps have inverted signature lights, and they don’t feature a cut in the bottom edge like the 2021 3 Series. The kidney grille is upright, and for obvious reasons, it’s a closed panel and features blue accents. The lower grille is sharper and in a proper hexagonal shape.

On the sides, the BMW i3 sedan has special aerodynamic wheels for enhanced efficiency. The rear-end features new badges, a slightly different bumper, and the tail lamp clusters sport a new design, although it’ll take a magnifying lens to view the difference. The Tesla Model 3 adversary may have a special underbody protector that also improves aerodynamics.

The 3 Series electric will have minor model-specific visual differences from the new 3 Series on the inside. These should include blue accents on the start/stop button and the gear selector lever, the BMW i logo on the door sill plates, and model lettering on the floor console. Ambient lighting, which could be a standard-fitment, may provide BMW i Blue illumination by default.

Spy pictures of the new 3 Series range snapped in Europe suggest that it could gain the new iDrive 8 driver-passenger vehicle interface. The i3 Sedan may get the same technology.

The new iDrive 8 system has a wide curved display, which in its debut model iX, groups together a 12.3-inch fully digital instrument cluster and a 14.9-inch touchscreen. A new design language with catchy graphics and other modern attractions gives an immersive visual experience in the new iDrive 8 system. The voice assistant of the new system offers natural dialogue, and it can be given any desired name, which makes the whole experience even more humanly. 5G mobile network connectivity and BMW Digital Key Plus (Digital Key 3.0) support are two more highlights of iDrive 8.

A BMW-Brilliance-made 70.27 kWh lithium-ion battery pack is the motor’s source of energy, as per a report from d1ev.com, which cites the MIIT catalog. The 3 Series electric will consume 14.3 kWh per 100 km, and travel 526 km (327 miles) on a full charge.

Expect to see charging specifications that are identical to the iX3. Through an 11 kW AC charger, it takes 7.5 hours to fully charge the SUV. The 3 Series EV should support a 150 kW DC charger, where it would be possible to quick-charge to 80% SoC in about 35 minutes.

“At the moment, in the BEV area, others have more product, and especially Tesla’s share is stronger,” Jochen Goller, President & CEO, BMW Group Region China, said at BMW Group Analyst and Investor Day 2021.

“But we are now ramping up, we’ve got cars in all the volume segments. Let’s not forget next year 3 Series, 7 Series, and so on, so forth,” he said, confirming that an all-electric 3 Series is in the pipeline. “And on top of that I think for the next 5 or 6 years we will see a very sizable sales in the ICE which we make good margin and this is a transition which we have to manage but because we play in both fields, and we will manage it,” he concluded.

Goller said customers view the conversion of ICE vehicles to BEVs (multi-energy platforms) differently than experts. “This purpose-built conversion topic in my opinion is nothing which the customer really discusses. The customer is discussing the design, the brand, and the connectivity and the powertrain,” he opined.

A scoop post from g80.bimmerpost.com forum member yunguldyn states that the production of the BMW 3 Series electric (now known as the BMW i3) will start in March 2022, whereas a report from autohome.com.cn, said that it would debut in the second half of 2022. It is likely that BMW will not make the 3 Series EV available on a global scale, rather waiting for the next-gen model until 2025 to launch its global onslaught.

BMW Brilliance, the joint venture between the BMW Group and Brilliance China Automotive Holdings Ltd, started constructing a new plant in Tiexi, a district of Shenyang in the Liaoning Province, on 1 April 2020. The extension of the existing plant will ramp up the production to satiate the demand for luxury cars in the world’s largest auto market.

The new Tiexi plant will be built on an overall area of 2.9 sq. km. and will have a new press shop, body shop, paint shop, assembly shop, and external infrastructure, apart from additional space for production expansion if required. The new plant will be ready for serial production this year and will utilize BMW’s flexible manufacturing to make fully-electric and plug-in hybrid models, including the electric variants of BMW 3 Series (new BMW i3) and BMW 5 Series (BMW i5), as per Chinese news reports.

The upcoming plant in Tiexi will be the largest project undertaken by BMW Brilliance and is located bordering the Hun River. Factors such as environmental and resource conservation are considered since the company started preparing the land for construction. Working with the district government, BMW Brilliance’s construction team has come up with an environmental governance plan to enhance the overall natural environment of the Hun River. The new production centre blends BMW’s Industry 4.0 and intelligent manufacturing of China to boost the local economy and auto industry development.

BMW Group has announced that it plans to launch 25 electrified cars by 2023, 13 of them pure-electrics. Following the iX3 in 2020, Munich launched the BMW iX SUV and the BMW i4 four-door Gran Coupe in 2021. The electric 3 Series, 7 Series, X1, and 5 Series follow as the next step in the firm’s ‘Power of Choice’ strategy.

The company sees itself becoming a strong player in China with the expanded EV line-up, Goller indicated at the BMW Group Analyst and Investor Day 2021. He said:

With our internal planning we’re very confident that we’re well beyond what we need to do, and as also communicated yesterday, we’re talking about 13 BEVs by 2023. We will localise all of our BEVs in the key volume segments. And so, I would say we are in a pretty strong position there.

BMWBlog has suggested that the BMW Die Neue Klasse architecture will underpin the next generation 3 Series EV which is expected in 2025. This version should be made available globally to challenge cars such as the Audi A4 e-tron (Audi E4), Tesla Model 3, and the Mercedes C-Class EV with highly competitive specifications including the 800V system. Speaking to BMWBlog at the IAA 2021, BMW’s R&D boss Frank Weber said that the BMW Die Neue Klasse architecture has been designed for transforming the future of BMW, and the 3 Series and X3 electrics could be the first recipients.

The BMW Die Neue Klasse architecture will be an advanced platform with Gen 6 batteries, which will have enhanced recharging capabilities and higher energy density, with a greater focus on recycled Nickel and a lower focus on rare materials.

BMW has announced that it will launch 7 NEVs (New Energy Vehicles) in China this year. NEVs include full electric and hybrid powertrains. These comprise of BMW iX, BMW i4, BMW iX3, pure electric BMW 3 Series, a pure electric flagship (referring to the i7) and two PHEV models.