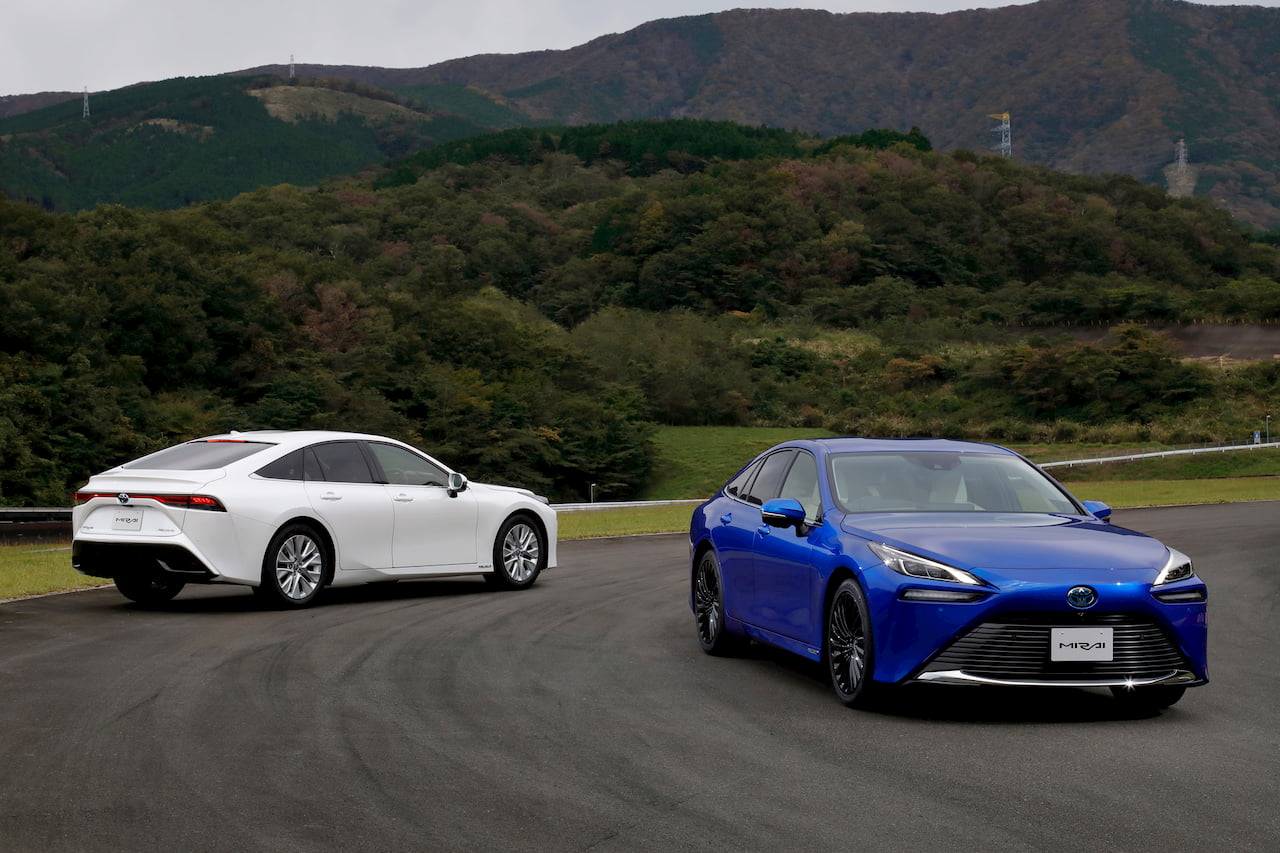 TMC has launched the 2021 Toyota Mirai on the market with features and looks identical to the prototype exhibited at the 46th Tokyo Motor Show held in the fall of 2019. The Toyota Mirai shares the platform with the Toyota Crown now and thus switches from the conventional FF to the FR layout. With the weight balance between the front and the rear 50-50 now, high-speed stability (and handling) of the car is said to be greatly improved.

Toyota took an exceedingly long time to clear the orders placed for the first-gen Mirai, years in some cases, due to the complexities involved in manufacturing the fuel cell stack, but the supply system has been “drastically improved” for the incoming model with fuel cell unit capacity increased by 10 times.

While the first generation Mirai, launched in 2015, was based on a front-wheel-drive chassis (about 10,000 units were sold globally), the new Mirai is rear-wheel drive car with a dynamic coupe-inspired design and gets better cabin space and comfort. Toyota says the switch to the RWD platform gives it a higher degree of body rigidity leading to greater agility and responsiveness, and secondly a lower centre of gravity which makes the handling nimble and rewarding.

The hydrogen-powered car gets a highly desirable design without being aggressive, sporting a body that is 85 mm longer, 70 mm wider and 65 mm lower. The wheelbase is 140 mm longer in the second-gen model, and that’s a significant improvement. The all-new model should not only look like a Lexus ES or BMW 5 Series-sized executive sedan (E-segment sedan) but also feel and drive like one.

The Toyota Mirai in its new form has more interior space and can seat five passengers in comfort. The 2021 Toyota Mirai gets a brand-new blue colour that has never been featured on a Toyota before.

We have pursued the goal of making a car that customers will feel they want to drive at all times, a car that has an emotional and attractive design and the kind of dynamic and responsive performance that can bring a smile to the driver’s face. I want customers to say, ‘I chose the Mirai not because it’s an FCEV, but because I love how it looks and performs; it just happens to be an FCEV.

The 2021 Toyota Mirai’s fuel cell stack achieves a maximum output of 174 PS and has a power output density of 4.4 kW/L. In comparison, the old Toyota Mirai’s fuel cell stack’s maximum output and power output density were 155 PS and 3.1 kW/L respectively. The battery capacity is 4.0 Ah instead of the old model’s 6.5 Ah, while the fuel tank capacity is 141 litres as opposed to 122 litres.

The next-gen Toyota Mirai has three hydrogen fuel tanks, one up from the old model. The driving range has been extended by about 30%, from 650 km to 850 km, and that is an incredible feat. The new fuel cell system, Toyota claims, endows the Mirai a “linear, smooth response when pulling away and an elegant driving feel.”

The Toyota Mirai Modellista boasts a sportier exterior with accessories designed by Toyota Customizing & Development. This is for the first time that Toyota Mirai customers are able to get Modellista parts and part sets.

The Toyota Mirai’s Modellista aero parts set comprises a front spoiler, side skirt and rear spats w/o rear bumper garnish – all painted/non-painted. They are available individually as well, in addition to chrome mirror garnish, chrome door handle garnish and tinted/dark tinted window film. A kitted-up Mirai Modellista will be displayed at Tokyo Auto Salon 2021 on the 15th of next month.

From the second generation, Toyota has decided to increase the production capacity of the Mirai to 30,000 units a year. The company started the production of the 2021 Mirai in Japan this month and will continue building the flagship eco-friendly car at the Motomachi Plant in its homeland.

What is the 2021 Toyota Mirai release date?

The 2021 Toyota Mirai has gone on sale in Japan with global markets set to receive it through 2021.

The 2021 Toyota Mirai range is approximately 850 km for a full tank of Hydrogen.

Is the new Mirai coming to India?

No confirmation from Toyota on the new Mirai yet but TKM is interested in creating an FCEV market in India.