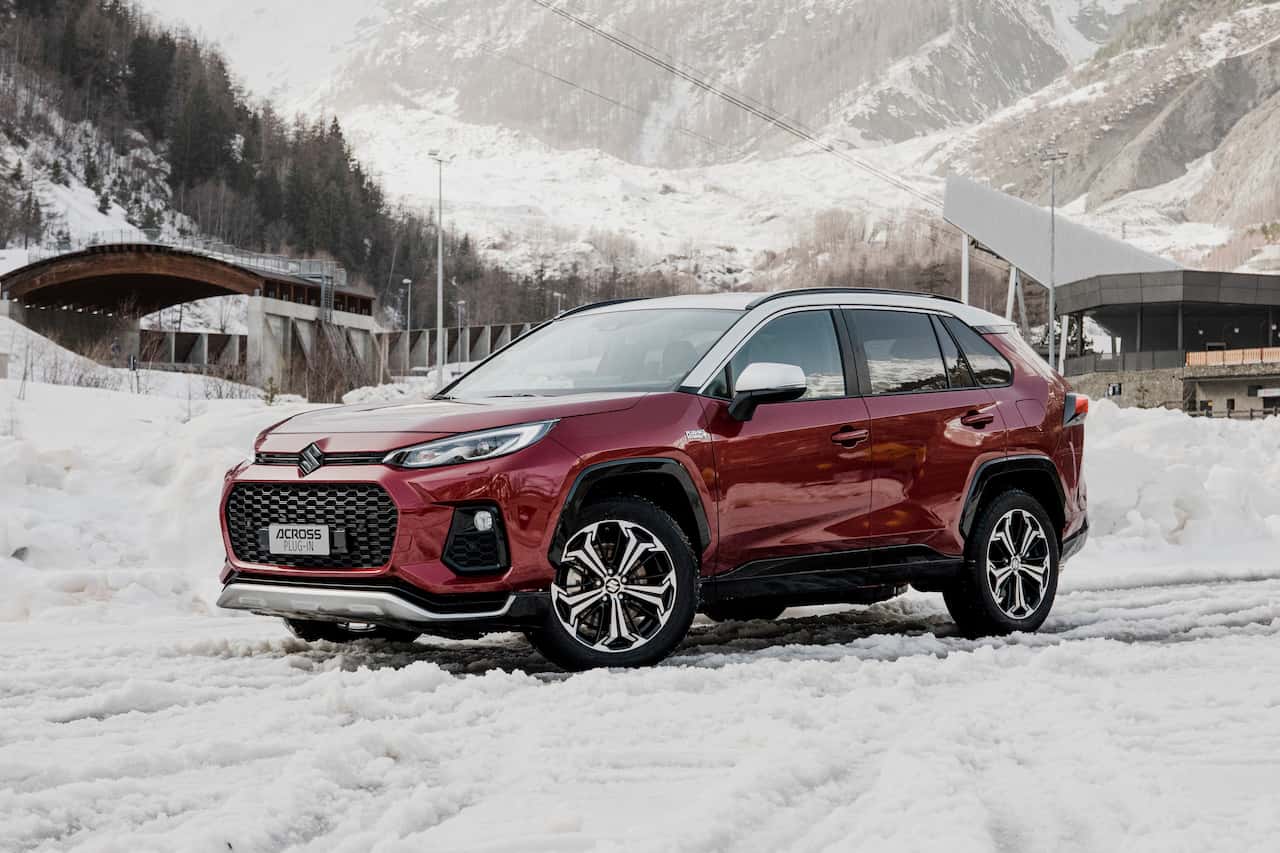 Introduced on 1 July 2020, the Suzuki ACross is nearly a year old. Look at what Suzuki offers in its most powerful car in the European market and how it differs from the Toyota RAV4.

The Suzuki ACross is essentially a fifth-gen Toyota RAV4 with a unique front-end. Interestingly, the headlights on the Suzuki-badged SUV resemble that of the Toyota Wildlander, the China-only version of the RAV4.

Suzuki has performed substantial changes to the fascia of the Toyota, but that’s where the differences end as the side, rear, and interior show no apparent changes. At the front is a large open grille and new LED headlights with a bi-beam projector and LED DRLs for a sporty look. The ACross is hoisted on 19-inch wheels and comes in 6 colours – Sensual Red Mica, Attitude Black Mica, White Pearl Crystal Shine, Grey Metallic, Dark Blue Mica and Silver Metallic.

The interior environment, Suzuki says, is designed to evoke driving confidence, comfort and luxury. Soft padding in the door trims and dashboard, a 9-inch touchscreen compatible with Apple CarPlay, Android Auto and MirrorLink kick off the features. The car has 490 litres of boot space and comes with an electrical outlet and a socket to charge smartphones. The car’s practical storage spaces include side trays on both sides of the car, centre tray, console box, and cupholders.

Electric motors at the front and rear combine with a 2.5-litre petrol ‘A25A-FXS Dynamic Force’ engine tuned to churn out 136 kW and 270 Nm. With a maximum power output of 134 kW and 270 Nm of torque, the powerful front electric motor is wired to an 18.1kWh (50.9 Ah) Lithium-ion battery pack mounted beneath the floor. The motor at the rear develops 40 kW and 121 Nm.

The Plug-in Hybrid system has 4 modes – the default EV mode, Auto EV/HV mode, HV mode, and battery charger mode, which is up to the driver to choose based on outside conditions and the battery charge level. In the EV Mode, the vehicle is completely driven by the electric motor up to an impressive range of 75 km (WLTP), much above the 50 km mandatory in the EU to be classified as a low-emission vehicle.

Suzuki explains the E-Four electronic 4WD system as offering “genuine 4×4 performance while maintaining superior fuel efficiency.” The rear motor works in tandem with the front motor to vary the torque ratio from 100:00 to 20:80 that gives the car improved stability when setting off on slippery surfaces and improved handling on a variety of surfaces. The AWD Integrated Management controls functions like transmission shift scheduling, drive force distribution, engine throttle control Electric Power Steering (EPS) assistance and braking. The Trail Mode is an automatic limited-slip diﬀerential control feature that leads to the best possible control and grip on slippery surfaces.

The vehicle has earned positive praise from the European media.

Suzuki’s version of the RAV4 plug-in hybrid is produced at Toyota’s Nagusaka factory in Japan. The ACross is the first model supplied by Toyota for Suzuki’s European business, made possible because of the companies’ collaboration firmed up in 2019. Suzuki gets access to the world’s best-selling SUV to meet CO2 targets. It can also introduce it to customers upgrading from the Vitara and strengthen its base in the C-Segment. Following this first Suzuki plug-in hybrid electric vehicle in Europe, there’s also a Swace full-hybrid electric vehicle in the Old Continent. The latter is a rebadged Toyota Corolla Touring Sports (Japan: Toyota Corolla Touring Sport).

Suzuki ACross in Norway

Suzuki ACross in Italy

In Italy, Suzuki launched the ACross plug-in hybrid along with a Yoru edition in October 2020. Available exclusively through Suzuki’s web store, the Suzuki Across Yoru Edition was limited to 12 units. Yoru is a Japanese term for the night and its elegance, which this limited-edition ACross portrays with its special exterior. The roof and mirror caps are painted in silver for a contrasting look with the body paint, for which there are three options: White, Black and Blue.

The Suzuki ACross Yoru features exclusive 19-inch alloy wheels in a gloss black finish, which matches the colour of its wheel arches and roof bars. The interior is no different from the regular Suzuki ACross. The price of this online-only special edition plug-in hybrid electric car was EUR 47,900.

Though Toyota sells the RAV4 powered with a gasoline engine, it is only the plug-in hybrid with a 22g/km CO2 rating that Suzuki repurposes. It would help Suzuki reduce its average CO2 emissions and meet the target given by the EU and keep away from fines. Suzuki has a lower CO2 emissions target than other automakers in the region because sales are less than 300,000 cars annually. The company is achieving its goal using mild-hybrid technology for existing vehicles and including Suzuki’s strong hybrids at the upper end of the range.

Sales of the Suzuki ACross

While Suzuki hasn’t made announcements on the bookings or the car’s performance, data published by carsalesbase.com doesn’t paint a good picture of the company’s plug-in hybrid SUV.

2020 ended with 1,950+ units (1,958 cars as per JATO Dynamics, reported by AutoNews.com), which was a reasonable start for the ACross that is sold in limited regions and is a premium product for Suzuki. This year, monthly sales have dropped into low, double-digit figures. Production issues owing to the ongoing semiconductor shortage could be part of the reason. In January, February, and March, Suzuki was able to sell only 2, 12, and 32 units, respectively, as per CarSalesBase.