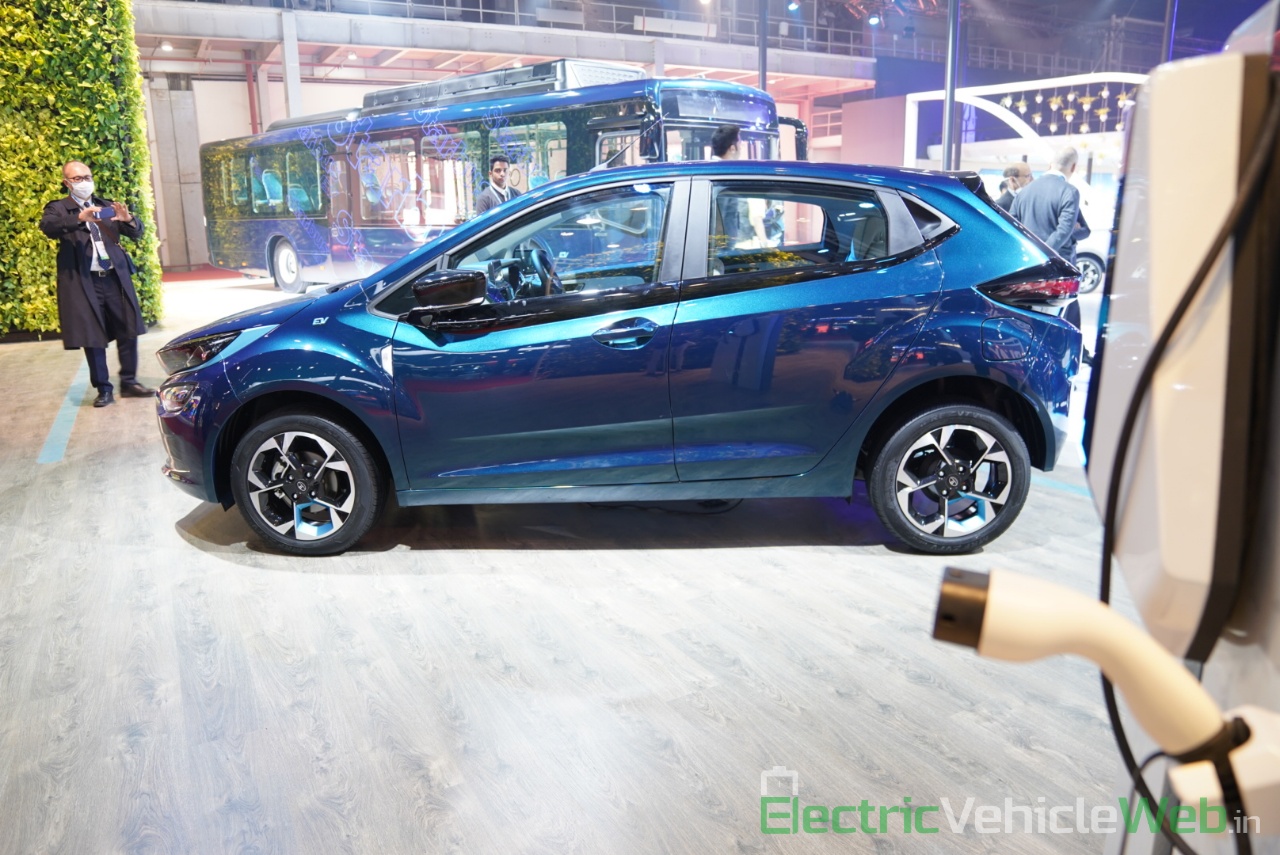 Update: In a recent investor presentation, Tata Motors has revealed how Tata Group companies are and will be supporting the launch of electric vehicles like the Tata Altroz EV. While we have already talked about Tata Autocomp and Tata Chemicals’ involvement in the electrification drive, two more Tata Group companies are worth mentioning here: Tata Power and Tata Motors Finance.

Tata Power has already installed 355+ public chargers across the country, and it plans to increase that count to 700 by the middle of FY2022, which is likely to be the time of the Tata Altroz EV launch in India. Tata Motors Finance will assist large fleets to procure EVs with structured solutions.

A report from ET Auto in January said that the Tata Altroz EV launch in India will take place in the second half of the year. Before the Altroz EV, the Tigor EV facelift will reach showrooms, and that could happen as early as the next quarter (April-June 2021). The Tata Altroz EV will be the first electric hatchback from Tata Motors to enter showrooms after the Tiago EV and the Nano EV projects (including the Jayem Neo) didn’t advance to the commercialisation stage.

The Tata Altroz EV will be the second derivative of the Tata Altroz following the iTurbo, which has a 1.2-litre turbocharged three-cylinder petrol engine producing 110 PS and 140 Nm.

The Tata Altroz EV will be the third Tata electric vehicle in India after the Tata Tigor EV and the Tata Nexon EV. Judging by the version presented at Auto Expo 2020m, much of the development of the new Tata electric car is complete, and road testing of the Tata Altroz EV began in early-2020. The Altroz EV is reckoned as the second or third of the six upcoming Tata cars or variants in 2021. Here’s everything we know about India’s first premium electric hatchback.

The Tata Altroz EV was unveiled in a near-production form at the 2019 Geneva Motor Show (March 2019). It made its Indian debut about a year later at the Auto Expo 2020 with an updated design that was production-ready. The bumpers were new and the electric car appeared to have its ground clearance increased compared to the Swiss show car. The alloy wheels were smaller, the EV badge was moved to the lower portion of the tailgate and a pole antenna had replaced the more expensive shark-fin type.

Compared to the Altroz, the Tata Altroz EV sports a cleaner yet funky styling. At the front, the upper grille and the lower grille are replaced by closed-off gloss black panel and body-coloured panels respectively. The upper panel features a teal blue EV badge, while the lower panel is adorned with the signature tri-arrow pattern. In place of a full-width chrome strip, a teal blue stripe embellishes the bumper edge.

On the sides, unique 16-inch alloy wheels in silver with teal blue highlight will distinguish the Tata Altroz electric. A teal blue EV badge at the bottom of the tailgate comes in place for the same reason. On the inside, apart from teal blue accents on various elements like the AC vents, centre console and instrument panel, expect white or a comparable light-tone seat upholstery featuring the tri-arrow pattern.

The Tata Altroz EV will be the first Alfa-Arc platform electric car. It will feature the Ziptron electric vehicle technology, which comprises a PMSM (Permanent Magnet Synchronous Motor) and a Lithium-ion battery pack with IP67 dust and waterproof rating. A real-world range of at least 250 km, DC fast-charging (80% charge possible in 60 minutes), regenerative braking and a powertrain warranty of 8 years/1.6 lakh kilometres are expected for the new electric car. Tata Motors engineers have succeeded in packaging the battery pack in the Altroz without affecting its ground clearance or cabin space.

Some of the above parameters may apply to select configurations, as the Tata Altroz EV might come in more than one range variant. Tata feels some customers may use the Altroz EV in the city and use their other car for long trips and excursions. For them, a lower range (lower capacity battery pack) and/or lower motor outputs may not seem like a compromise and matches their usage. Shailesh Chandra, President, Tata Motors, has suggested that the company could offer a lower-spec variant that is more affordable targeting the city customers. The lower range version would also make the Altroz EV’s price very attractive.

In addition to the aforementioned 16-inch alloy wheels, the Tata Altroz EV should be offered with features like LED headlamps, semi-digital instrument cluster, blue ambient lighting, ZConnect touchscreen infotainment system with Apple CarPlay & Android Auto, wearable key and much more. Do note that the standard variant isn’t available with LED headlamps. Expect the trim selection to be relatively smaller and even the base configuration to pack a lot of attractive features as the Altroz EV is targeted at personal car buyers and not the fleet segment where aspirations are different.

Tata Motors has made distinguishable changes for the first time on an electric version with the Altroz EV. The dashboard is redesigned and the flow of the centre console in different with a ‘walk through’ effect (refer image above). The parking brake (electric) and the drive selector are integrated neatly on the centre arm rest which has a compartment for small articles.

The Tata Altroz EV will feature EV-specific connected car functions operable via the new Tata iRA app. In addition to the standard functions, it should allow checking the charging status and time, battery pack health, motor health and charging history.

The Tata Altroz EV is expected to be priced between INR 10-12 lakh (ex-showroom). While the price depends on the level of localization of the powertrain, Tata Motors says the difference between ICE and EV would be less than 25 per cent. Additionally, Shailesh Chandra, President, Passenger Vehicles Business Unit at Tata Motors says the price differential between petrol or diesel variants of the Altroz and Nexon would logically have to be maintained on the EV variants. For reference prices of the XZ Diesel variants are 25.5 per cent apart.

The Tata Group is planning to manufacture battery cells (Tata Chemicals is setting up a pilot plant to produce the cells in Dholera, Gujarat for application on Tata electric cars) and create an ecosystem for making Tata electric cars affordable including the localization of the battery and the motor by Tata Autocomp. These steps, coupled with the fall in battery price, would lead to the gradual reduction in Tata electric car prices in the coming years.

Shailesh Chandra talked about the Tata Altroz EV launch in an interview with thehindubusinessline.com recently. He described the Altroz EV as the “the biggest” electric vehicle launch from Tata Motors yet. Chandra said that the company sees the ALFA architecture as a massive advantage and thanks to the modular platform, it can electrify its entire line-up if it wanted to. Priced lower than the Nexon EV, the Tata Altroz EV has the chance to become the best-selling electric car in India for personal use.

Before the COVID-19 pandemic struck, Tata Motors had set the release of the Altroz EV between January and July 2021. The launch is now expected in the second half of the year, in the festival season.

What is the expected Tata Altroz EV price?

What is the Tata Altroz EV launch date?

Expect to see the Altroz EV in showrooms around this festive season.

What are the expected key Tata Altroz EV specifications? 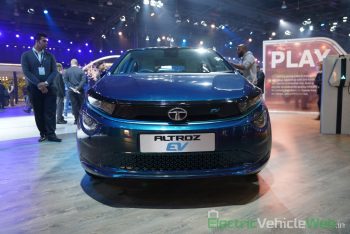