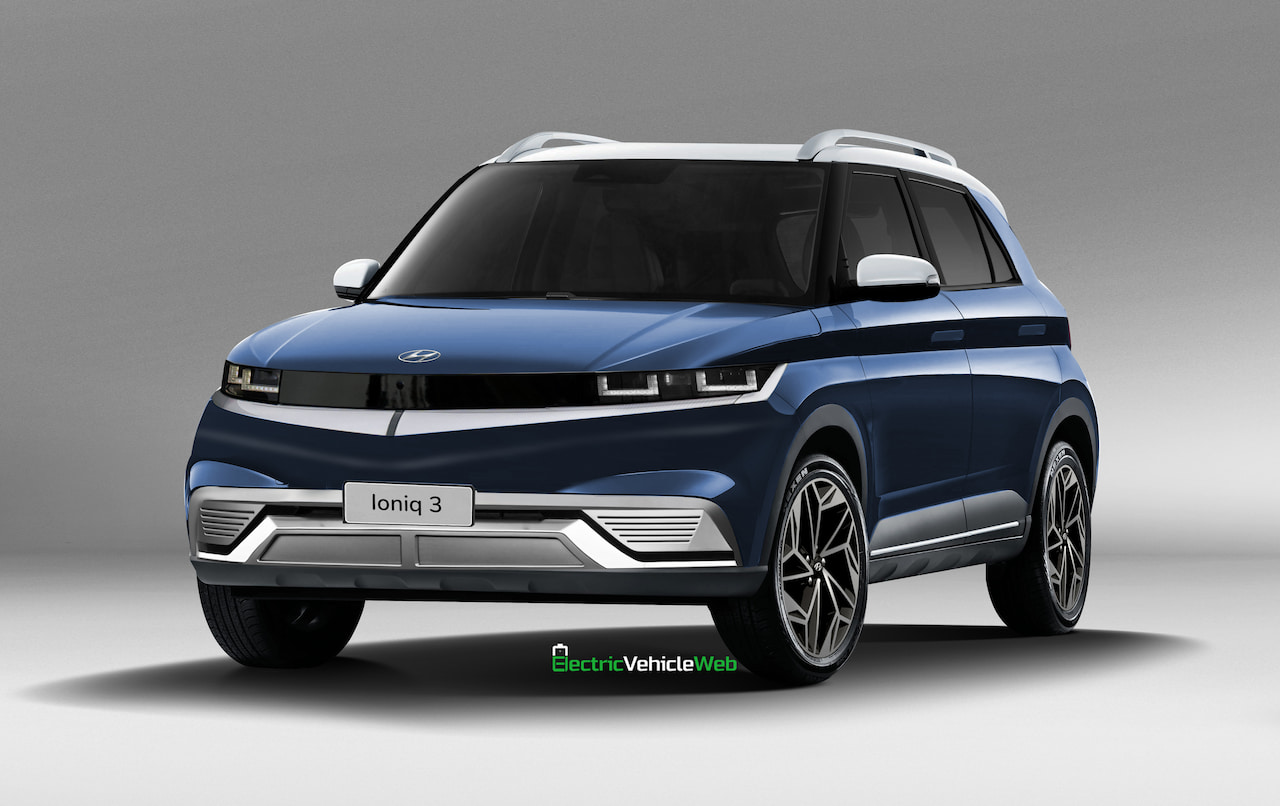 Update: ‘eM Platform’ section added to the story, and a render updated to the article.

Hyundai Motor Group’s Singaporean plant has brought new excitement to the global EV market. Building upon its report prior to the plant announcement, The Straits Times reiterated in October 2020 that the yet-to-be-announced Hyundai Ioniq 3 is in the pipeline. Smaller than the Hyundai Ioniq 5, it will roll out of the company’s new plant in Jurong, Singapore.

Construction of the Hyundai Motor Group Innovation Center in Singapore (HMGICS) will complete by the end of this year. According to the Singaporean publication, assembly of the Ioniq 5 would start first. Two-three years later, the Hyundai Ioniq 3, imaginably a crossover the size of the VW T-Cross or Ford EcoSport, would be produced here.

The Hyundai Ioniq 5 and the Hyundai Ioniq 3 will likely be exported from Singapore, possibly to neighbouring Asian markets including ASEAN countries. HMG could build up to 30,000 Hyundai electric cars at the Singaporean site every year, and obviously, domestic demand isn’t big enough to absorb the full yield. The estimated annual sales volume for Hyundai EVs in the domestic market is 5,000-6,000 units.

The HMG Singapore facility will comprise a futuristic R&D centre and a smart vehicle production site. The latter is believed to be a sophisticated assembly plant which would put together SKD/CKD kits sourced from an overseas site, and not conduct full-scale manufacturing. Still, a possible advantage for customers is Battery as a Service (BaaS) ownership model for next-gen Hyundai EVs.

Under BaaS, the battery price is not included in the vehicle sales price/finance payments. So, the initial cost to switch to a Hyundai Ioniq 5 and a Hyundai Ioniq 3 would be low. A battery typically accounts for 50% of the cost of EVs, making them expensive in an outright purchase model. Customers going for BaaS would get to conveniently take a battery subscription plan, and thus, their acquisition cost would be significantly lower.

There is no information on the design of the Hyundai Ioniq 3, but it will definitely take the form of a crossover SUV. ElectricVehicleWeb has imagined an entry-level Ioniq crossover developed as an EV from the ground up. We envision Hyundai giving the car a robust greenhouse and short overhangs. The design mixes elements from the Ioniq 5 and Ioniq 6, including the light signatures, wheels, and front mask.

The Ioniq 3 will be underpinned by the new Integrated Modular Architecture (IMA). This versatile platform can accommodate both electric passenger vehicles (eM) and purpose-built vehicles (eS). IMA is an evolution of Hyundai’s Electric Global Modular Platform (E-GMP), which has been designed to provide an efficient and scalable architecture for a range of next-generation electric vehicles in 2025.

Hyundai is planning to use its new eM platform for various entry-level and premium models. This versatile platform will enable the company to introduce a number of innovative features, such as B-pillarless and swing doors, a swivel seat in the first row and a long-sliding seat in the second row. Other cutting-edge amenities include a built-in air purifier and controller firmware OTA updates. Since the Ioniq 3 has a stiff cost target, it may not include all of the best features from the eM platform.

The Ioniq 3 will have a longer wheelbase than most EV rivals which will translate into added space for passengers and cargo. With a dedicated EV platform, the Ioniq 3 will have a best-in-class wheelbase, as told by Hyundai design boss SangYup Lee to Car And Driver. This extra space opens up many new possibilities for designers, making the Ioniq 3 a truly unique electric vehicle.

New electric cars based on the eM architecture will feature a cutting-edge battery system called ‘Cell-to-Pack’. This new system will do away with battery modules, resulting in increased energy density, reduced cost, and quicker charging times. Hyundai is also considering the ‘Cell-to-Frame’ battery system, which would see the battery cells integrated into the car’s chassis.

As we move towards an increasingly electrified future, Hyundai is committed to making the switch to standardized battery packs across all of its eM and eS platform-based models. These new packs will be developed based on a modular system, with nine different types in total. Six of these will be 800-volt units for models based on the eM platform, while the remaining three will be 400-volt units for eS platform-based models. For entry-level EVs built on the eM platform, Hyundai plans to use both NCM and LFP cells. However, performance EVs on this platform will only make use of NCM cells.

As the adoption of electric vehicles continues improving, carmakers are working to make them more affordable. Hyundai is planning to reduce the cost of NCM cell batteries for its eM platform EVs by 40% as compared to NCM cell batteries of the E-GMP platform by 2030. This will be possible thanks to the company’s plans to commercialize solid-state battery technology. The eM platform EVs will also be available with battery packs containing lithium-ion cells, making them even more affordable. The Ioniq 3 should be the main recipient of this low-cost battery technology.

Hyundai Motor has a partnership with Singapore’s largest charging company SP Group to build the foundation for a battery subscription service in the country. The two companies plan to build an innovative electric power ecosystem by increasing the supply and charging infrastructure of EVs, researching policies for EVs in the country and recycling electric car batteries.

SP Group currently has the largest network of fast chargers in the country and is making strides to expand it to encourage EV adoption among Singaporean car buyers.

Watch the Ioniq 3 get built at HMGICS

It was in August 2020 when a report from thestraitstimes.com revealed that Hyundai plans an electric vehicle factory in Singapore and launch the Hyundai Ioniq 3. Following that development, HMG announced a new Hyundai electric plant in Singapore in October 2020.

Ioniq EV customers in Singapore will be able to watch their car being manufactured, and once their car is ready for delivery, it will be taken to a 620-metre-long ‘Sky Track’ to give them a test drive. Sky Track will be located atop a high-end seven-story ‘Innovation Centre’, and HMG’s entire Singapore facility, including this R&D centre and the manufacturing plant, will measure 44,000 m2. The building itself will cover an area of 28,000 m2, and feature a landing port for Urban Air Mobility (UAM).

Speaking at the groundbreaking ceremony in October 2020, PM Lee Hsien Loong also said that HMG is developing an electric Vertical Take-Off and Landing (eVTOL), or basically a flying car, with 2028 as the deadline, hence the construction of a landing port for Urban Air Mobility (UAM) on the building.

Perhaps one day we will manufacture them at HMGICS and see them fly in the skies of Singapore. Never say never!

While Hyundai has confirmed only Ioniq 5 (2021) Ioniq 6 (2022) and Ioniq 7 (2024) models, ElectricVehicleWeb understands that the company has filed a trademark application for Ioniq models ranging from numbers 1 to 10, keeping the door open for many smaller and bigger EVs under the sub-brand.

The Hyundai Ioniq 3 is one of these several yet-to-be-announced Hyundai electric vehicles. Hyundai had confirmed that odd numbers were designated to crossover vehicles and even numbers for sedans. The Ioniq cars wear the Hyundai badge, and sell through the company’s dealerships and isn’t a standalone brand like Genesis.

Singapore doesn’t have an auto manufacturing industry, and HMG typically sets up plants in only well-established markets where there is a significant demand for cars. However, the company has indicated a renewed focus on the ASEAN region in the recent past, announcing its first auto plant in Indonesia and new ASEAN-focused models in November 2019. The EV plant in Singapore will further strengthen its business in the region.

Singapore is promoting EVs to a great deal with various measures. The country’s Land Transport Authority has announced that it has put a ban on the sale of new diesel cars for both private and taxi use from 2025. Moreover, to make using EVs convenient, it plans to install 60,000 charging points across the country by 2030, two-thirds (40,000) at public car parks and one-third (20,000) in private areas.

The Hyundai Motor Group (Hyundai, Genesis and Kia) has an ambitious EV strategy that aims to sell 1.7 million vehicles in 2026. This year, Hyundai and Genesis combined aim to sell 220,000 EVs worldwide. These plans were revealed by Hyundai’s CEO Jaehoon Chang, in an interview with Automotive News in December 2021.

Featured image: A speculative rendering of the Hyundai Ioniq 3 by ElectricVehicleWeb. 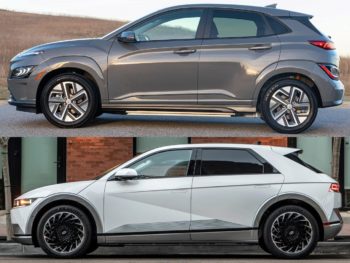 We compare Hyundai’s most affordable and most expensive EVs now available in the U.S.