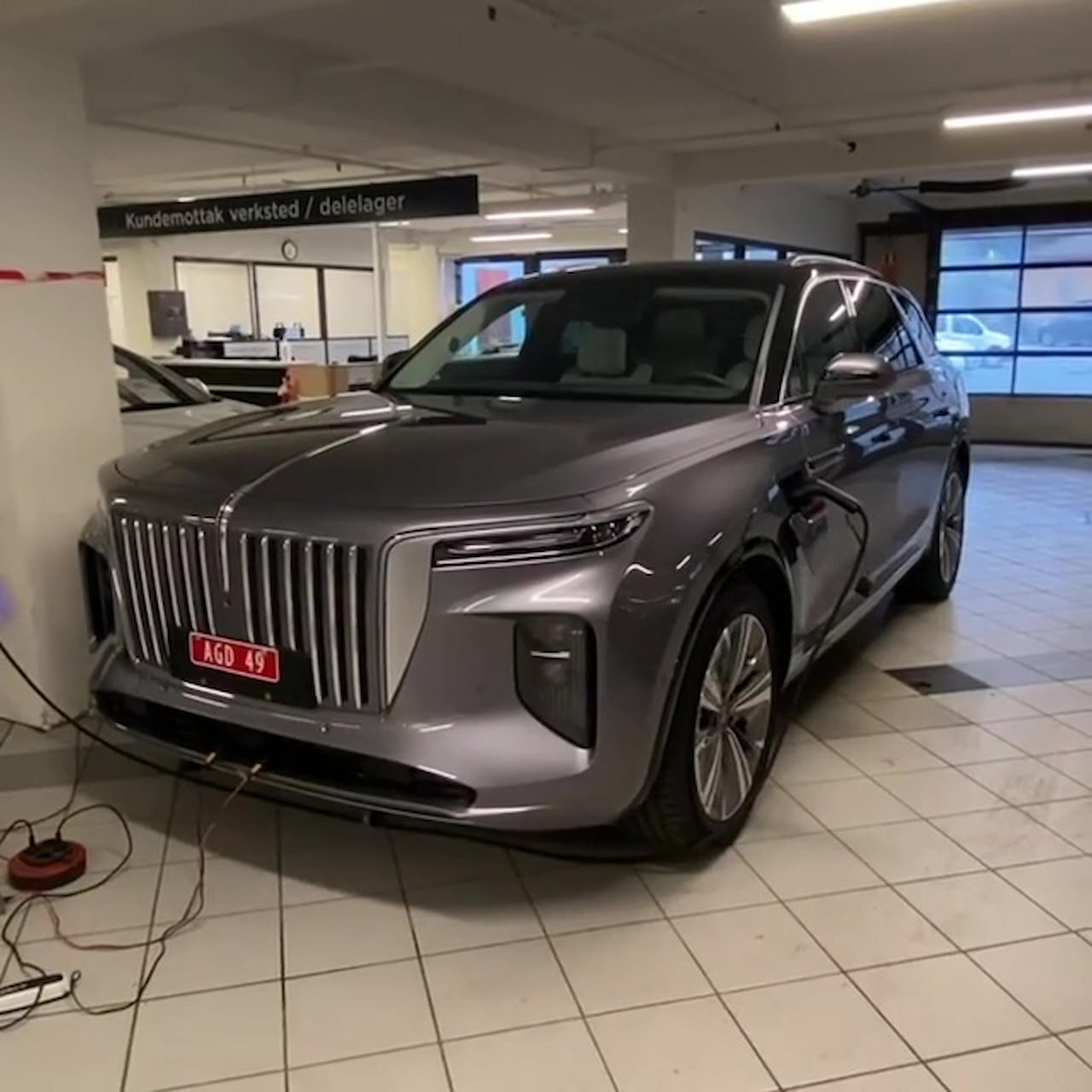 ElectricVehicleWeb can reveal that deliveries of the Hongqi E-HS9 in Norway have started. Between January and the first week of February, 232 units of the E-HS9 have been registered in the country. By the end of that period, the E-HS9 ranked 12 among the country’s 15 highest-selling cars, 14 of which were 100% EVs.

The first batch of Hongqi E-HS9 cars for customers reached Norway in 2021. FAW-Hongqi held the launch ceremony of its export commencement on 29 September 2021. At the end of October 2021, FAW-Hongqi loaded more than 400 on Wallenius Wilhelmsen’s Thermopylae cargo ship, Hongqi Norge said in a Facebook post. Local media drives took place the same month, while test drives for customers were going to begin in December 2021.

FAW-Hongqi has received an order of 500 E-HS9s, says a report from Sina Auto. 1,300 Norwegians saw the E-HS9 prototypes the company shipped earlier in 2021, as per this report. The dealership Motor Forum Skøyen, in Oslo, has had one vehicle on display (via Facebook) since at least February 2021. The E-HS9 was on a roadshow across Norway, traveling places such as Stavanger, Kvinesdal, Arendal, and Tønsberg so potential customers could see it.

The introduction of the E-HS9 in the European market is regarded as the first and critical step for Hongqi to establish the brand in the Old Continent. Hongqi’s strategy is to start with North-western Europe with its E-HS9 and familiarize European buyers with the Hongqi brand. It follows a top-down approach and plans to launch small-and-medium-size SUV and sedan models.

FAW has tied up with Norwegian auto distributor Motor Gruppen – a reputable distributor in Norway with 45 years of experience – to sell the Hongqi E-HS9. Motor Gruppen would support both sales and service of the E-HS9 in the Norwegian market. FAW believes that it will expand the availability of the Hongqi range from Europe to the rest of the world in the future.

The Hongqi E-HS9 has a sleek exterior and a far more futuristic interior than any Rolls-Royce car. However, there’s no denying that its statesman-like styling has hints of the British model. The E-HS9 is generating interest even in other markets. On 29 September 2020, FAW had said that it had received 1,437 orders, of which 650 units have been ordered from abroad.

Giles Taylor, a former designer at Rolls-Royce, has designed the Hongqi E-HS9, the production version of the Hongqi E115 concept. Before joining Hongqi as its Global Vice President of Design and Chief Creative Officer, Taylor oversaw the Rolls-Royce Cullinan and Phantom designs.

The Hongqi E-HS9 features the 12-bar vertical grille that lights up in a U formation with the ‘Red Flag’ icon at the centre. The grille is flanked by two vertical ‘fangs’ to emphasize the 3D effect, and the headlamps could be the largest for a production vehicle. The shoulder line runs from the upper lamps across to the side to the rear combination lights to provide a commanding look. Other details worth mentioning include the pillar bezels to break the optical bulk, height emphasized by its glass-to-metal ratio, side applique designed like a light trail, and chrome bumper finishers.

The interior layout may be conventional, but the cabin is one of the most digital ones in the industry. There are seven displays divided between the first- and second-row occupants, four in the front and three at the back.

The base configuration has two 160 kW motors and an 84 kWh battery pack, and it delivers a range of 396 km (WLTP). The top-end configuration uses a 160 kW motor, a 245 kW motor, and a 99 kWh battery pack. It can go up to 465 km (WLTP) on a full charge. 108 kW is the maximum DC charging power. With just 10 minutes of fast charging, both configurations can return a range of 100 km or more. The E-HS9 supports wireless charging technology that can fully charge the SUV in 8.4 hours.

In a YouTube video, Wheelsboy reviews a customer-owned Hongqi E-HS9. The presenter shows how the exterior of the electric SUV is handsome and statement-making overall and its interior is spacious, luxurious, and high on tech. However, we also get to see that there are some pain points, like interior material quality, for instance, which make it clear that while the E-HS9 looks inspired by the Cullinan, it’s far from being a Rolls-Royce. It’s blisteringly fast for a 2.6-tonne vehicle, but, obviously, there is evident body roll when cornering.

Could the extended-range variant arrive in Norway this year? When EVW asked Hongqi Norway about the launch of the 120 kWh version for the local market, a spokesman said, “We expect customer deliveries for the Norwegian market (of the E-HS9) from January 2022. For the 120 kWh that has just started to sell in China, we cannot comment on any plans for this model for the Norwegian market at this stage.”

What do the Chinese think?

A talented Chinese sketch artist and automotive enthusiast who goes by the handle ‘Wei Sir’ had sketched the Hongqi E115 electric SUV before its debut. On the Chinese site PCAuto.com.cn, he says how the Chinese public perceives Hongqi changed completely after the H9 (flagship sedan) debut. He notes that everyone pays attention to the brand and the Chinese hope that Hongqi becomes a domestic luxury car brand that people aspire for.

Hongqi, originally a sedan for senior members of the Chinese government, over the last couple of years, is increasingly viewed as an aspirational luxury car brand in China with serious ambitions to take on the German Big 3. Sales of Hongqi have been on the rise, with the company drifting away from conservative looks and plain interiors to a more forward-looking design, electric drivetrains, new materials, and processes, integrating AI and 5G in its vehicles and promising to mass-produce L3 and L4 autonomous vehicles.