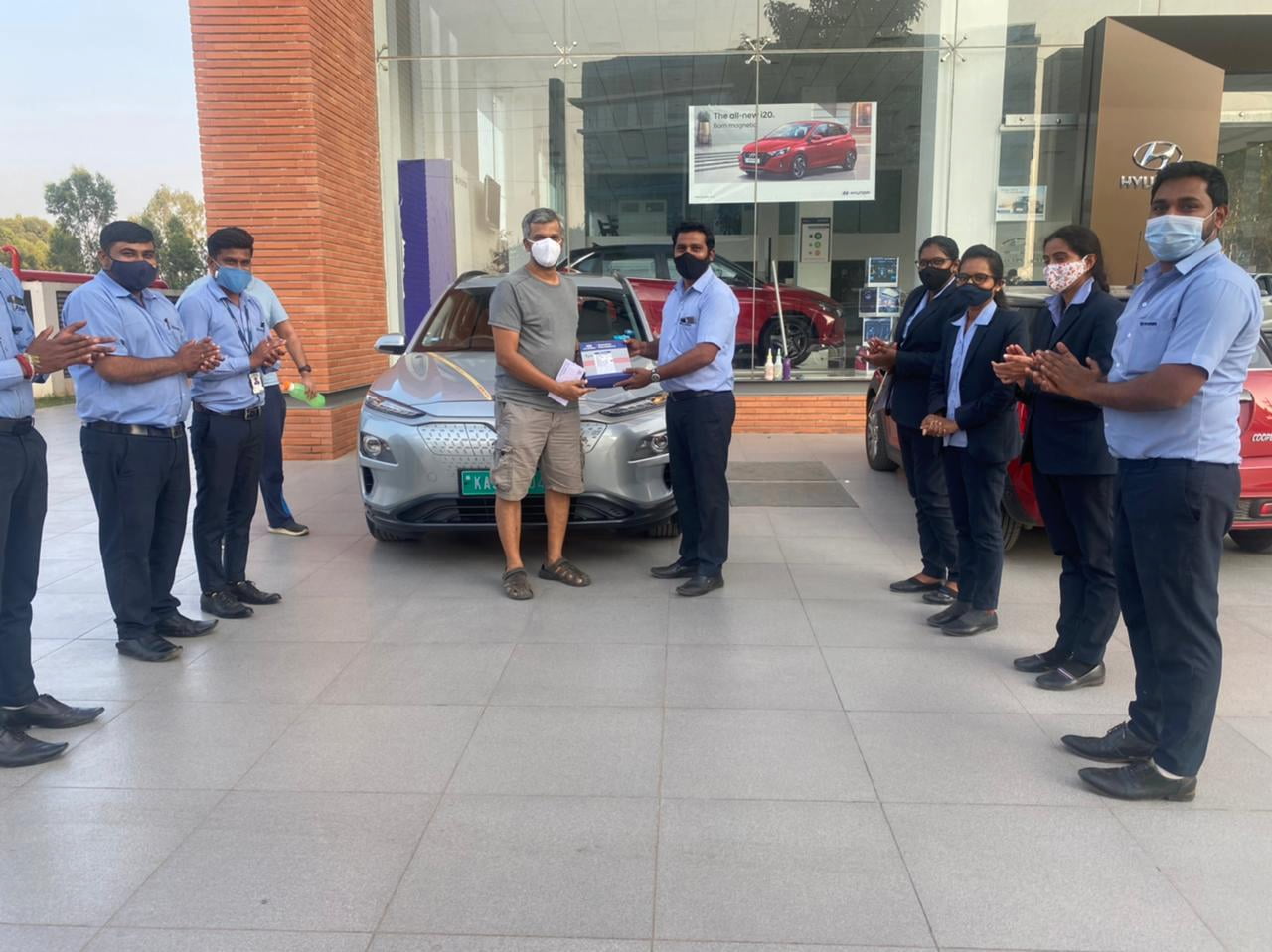 An all-electric SUV, the Hyundai Kona Electric has captured the attention of the Indian customers since its launch in 2019 as potentially the ‘first car’ in the family’s garage, thanks to its no-compromise range. We had a conversation with Akhil Krishnan, the owner of a Hyundai Kona Electric from Bangalore, to know his ownership experience.

When did you purchase the Hyundai Kona? Give us details from the starting phase of your ownership.

I got the car in September 2019 and I’ve clocked around 15,000 km. In terms of longer drives, Bangalore-Coimbatore is frequent, and I have also made a couple of trips beyond Coimbatore, which is another 60-70 km away, to Palghat in Kerala. I don’t necessarily need to take a break and charge. I can just about make it to Coimbatore. But if I have to go to Palghat, I charge up the Kona Electric for an hour or so. I usually make the same trip in a day or two.

Do you travel mostly with your family or alone? What are the measures you take to get the best range from your car?

It’s usually three people in the car – me, my wife and either my mom or dad. Most of the time is it’s just the three of us.

My air conditioning (AC) usage in the long drives on this route is kind of mixed. It mostly depends on the time of the day that I depart. If I am leaving towards the evening, I generally don’t use the AC much. With AC, I would get a range of about 340-350 driving at around 80-85 km an hour.

I usually leave the setting at 1, which is the lowest regenerative braking level. See, the thoughts are subjective. Few owners think that we will get a lesser range on highways as we don’t stop and start as much. In city driving scenario, when you slow down and then pick up the speed we use a lot of energy building the moment, coming back up to speed. Comparing the two scenarios where we don’t use the regenerative braking on the highways in longer drives, you actually lose out a bit. It also depends on the driving style.

What kind of distance do you clock between from your place, Bangalore to Coimbatore?

What is the most range anxiety that you felt? Can you recollect an instance?

Well, the first time that I took a drive I didn’t have anxiety as such. I am coming from a Mahindra e2o background; I still have it and its seven years now. I have experienced 1 percent SOC, 0 percent charge, take out the last juice of the battery, so I have done these adventures earlier on the e2o ownership cycle.

On the Kona Electric, how close have you come to zero?

Probably about 8 or 10 km of range left, and the car goes into crawl mode at that time.

Can you take us through the different kind of charging options you use? How much time does it take to charge in those?

Hyundai provides a 7.2 kW AC charger along with the car and it installs this charger free of cost at any location of your choice. That is my primary source of charging. About 80% charging is done using the 7.2 kW AC charger. I usually charge between 20-80% SoC just to prolong the battery life. Once it’s 15-20% I plug it in and restrict the charge till around 80%. So that takes about 4.5 to 5 hours. Apart from that, I do use the BESCOM’s DC charger that’s the utility here in Bangalore. BESCOM has installed 15 to 20 fast chargers in and around Bangalore. These are 25 kW DC chargers from Delta, I have used them on and off when I think I may not have enough time to charge the car through AC.

How long does it take to charge from the 25 kW DC charger? How much does it cost to charge the Hyundai Kona fully?

What do you do during these 30-45 minutes usually?

According to me, DC chargers are just for emergency sake. It is just a top-up, maybe 10-15 minutes to let you reach your destination, during which I do my emails and messages. Whatever your destination is, it has to be your primary source of charging, as that’s where your car is going to be parked for hours. These DC chargers are meant to take you across if you have a small deficit or a gap in getting there. But if you want to use it (DC) as a primary source of charging, the locations are pretty convenient. Good locations are walkable as you can go to any coffee shop or go to a shopping mall.

Is there any instance that you leave your car at a public charging station and somebody pulls out the charging cable?

The Kona has a provision in setting the upper limit of charge and what it does is it locks the connector to the car until it reaches that particular percentage. So once the charging is done, it unlocks the connector. You can’t pull it or yank it out until the car unlocks itself.

Have you tried charging the Kona like a mobile phone through a normal household socket?

Apart from the wall box, you still get the 16 amp portable charger which is actually restricted to 12 amp and that takes around 16-17 hours to charge the car from a three-pin socket. I don’t use that, I have used it only once. What I did was bought an aftermarket Level 2 20 amp charger so your MCB has to have around 32 amp support. Whenever I go on long drives I use this particular charger which plugs into a regular three-pin socket. It’s much faster than the one Hyundai gives.

Have you installed a solar roof which you use to charge your vehicle?

It’s an on-grid system, a net metering system. It doesn’t feed off directly from the solar panel. Whatever I import from the grid and whatever I export that set off is my bill as I supply way more access than what I draw. Bescom actually pays me for the surplus energy generated. I generate about 40-45 units per day and consumption is about 10 units max.

The improved Hyundai Kona is coming next year. As an owner, what are the changes and the issues that definitely should be addressed in the facelift?

The current battery pack size is okay, I don’t feel the need for the higher specification (64 kWh) that is sold globally. Considering the Indian price strategy, the 64 kW battery Kona is going to be around 35 lakhs which is quite high.

The Kona Electric is just slightly bigger than the i10 Nios in terms of interior space. It’s mainly a 2 or 3 person car. It is actually working out without a complaint for me, but the minute four people get in the car it is pretty uncomfortable, the back especially does not have space. Interior space needs to be improved.

Ground clearance is a little bit on the lower side, have had it hit the speed bumps here in Bangalore several times. Looks-wise, I am quite okay with it, it has aged well. Also, the Kona should have a bigger touch screen. Even the Hyundai Creta and incoming i20 have a bigger screen, and they get a lot more features. In the Kona, there are some glaring misses. Whatever they are offering in the Indian models (locally manufactured) which carries over here I think will be a good upgrade. Of course I’d also like to have the microfilter (cabin air filtering system) that is offered in the Korean model.

Finally can you take us through the service experience? Users have regularly reported Rs.Zero bill in India.

At the first 1,000 km service, I paid around INR 300 for interior cleaning and car washing charges. The same thing happened at the 10,000 service as well. Additionally, I did change the AC filter which was about INR 3,000 as it isn’t covered under warranty and due to my usage, was clogged. 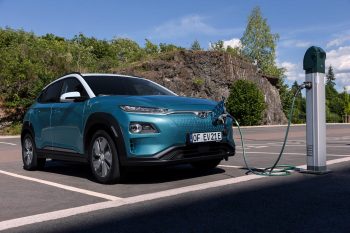 YouTube.com user Kona Kerala has documented a trip showing the Hyundai Kona Electric completing a 403 km-drive on a single charge.