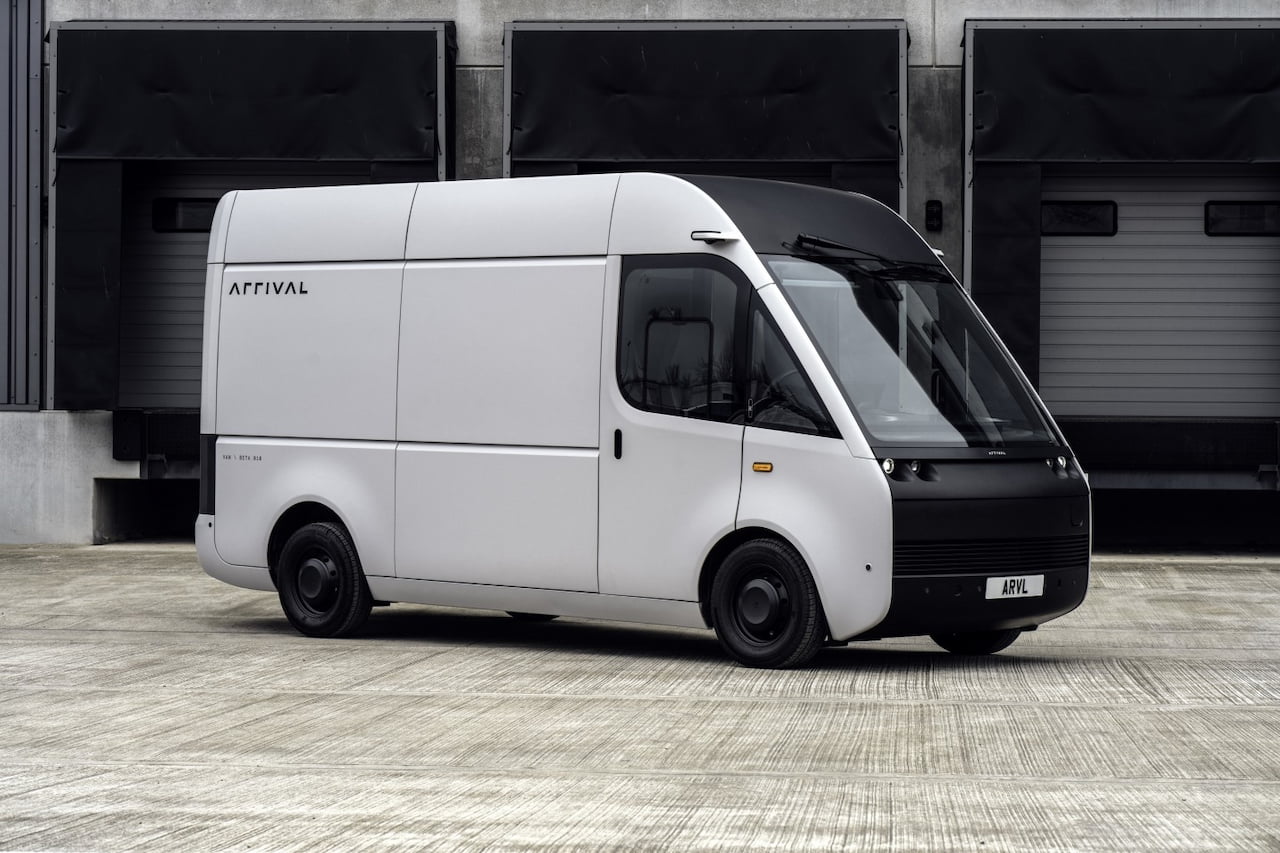 Arrival has released the complete specifications and a new video of the Arrival Van. Production is expected to begin in the third quarter of the year (July-September). We have updated the New Arrival Van section with the information.

While the old Arrival Van looked like an ice cream wagon, the final version has more pleasing aesthetics. The company has extended the front fascia that leads to a sloping windshield and A-pillar, and this has resulted in not only increased visibility but improved safety. The additional advantage of enhanced aerodynamics should improve the range, provided the vehicle’s weight is still in check.

The new Arrival Van has clear turn indicators and virtual rearview outside rearview mirrors operated via high-mounted cameras on the sides. The roof is flat without the rounded edges of the previous iteration. Lastly, the touch-operated sliding door opener seems to have been sacrificed in favour of a more cost-effective, physical sliding door opener.

The Arrival Van will be sold in eight different length and height versions. The H3L3 version is 5,790 mm long, 2,075 mm wide, and 2,730 mm tall. The wheelbase covers a length of 3,550 mm, while the ground clearance is 180 mm in this version. The Arrival Van excels fossil fuel alternatives with a payload capacity of 1,975 kg and a cargo volume of 2.4m3 per metre in length.

Four different battery pack configurations are offered: 67 kWh, 89 kWh, 111 kWh, and 133 kWh. The expected range of these configurations is 180 km, 240 km, 290 km, and 340 km, respectively. The top speed of the Arrival Van is 120 km/h across the range. The maximum charging power supported is 11 kW on alternating current and 120 kW on direct current.

The Arrival Van is no ordinary tool, and it puts a great level of focus on the occupants compared to traditional vans to see to it that they work as comfortably as in a car. Independent front and rear suspension, heated seats, full cabin climate control, and a 15.6-inch touchscreen are some of the key features in this aspect. To make driving safe and easy, the electric van is available with advanced driver assistance systems like digital e-mirrors (which don’t increase the vehicle width), 360-degree surround view, Traffic Sign Recognition, Blind Spot Monitoring, Lane Keep Assist, and Advanced Emergency Braking.

In July 2020 YouTube channel fullychargedshow put up a video giving the first close look at the Arrival Van. The video featured an early prototype built for UPS. Robert Llewellyn, the popular host, was impressed with the easy ingress and egress, excellent visibility and the spaciousness of the cabin. UPS has ordered 10,000 vehicles from Arrival, and its order will be fulfilled by end of 2024. It also has an undisclosed amount of investment in the UK-based start-up.

The old Arrival Van is 2.7 metres tall, built for walking in and out, and basically optimised in every innovative way possible for delivery operations. The company’s Chief of Product Patrick Bion said that the company will soon move to cargo vans of different heights and lengths, and then passenger vans. Sharing his impression of the progress of EVs in the commercial space, he said that a few years ago companies used to buy EVs to show their commitment to eco-friendliness but now they understand the considerable benefits EVs provide and that’s become the new selling point.

In June 2020, Arrival had unveiled a zero-emission electric bus that it believes will transform the public transport industry. The COVID-19 pandemic has made the commuters fear the public transport system and the Bus has been designed to offer a passenger experience with a focus on space, cleanliness and well-being. Kwame Nyanning, Chief of Experience, said that the company is working with cities to make every touchpoint in the urban transportation ecosystem better and more sustainable.

The Arrival Bus will be made in local Microfactories that are designed to assemble all vehicles from the company’s range. Arrival is planning to open 1000 of these Microfactories worldwide by 2026. The British startup hasn’t revealed product specifications or the features of the bus but it will be priced the same as its fossil fuel counterpart.

In March 2020, according to a report on PESMedia.com, Arrival moved into a new plant in Bicester, Oxfordshire in the UK. The facility has a floor space of 120,000+ square feet and will manufacture vehicles for the European market. Interestingly Arrival has not purchased the facility and is operating on a lease. Production is to start at the facility in the third quarter of the year.

Arrival plans to build ‘micro-factories’ near Los Angeles and New York that will deliver purpose-built vehicles suiting the needs of the local market, including the 10,000 UPS delivery vans. The company is based out of London and has offices in the UK, Germany, USA, Netherlands, Russia and Israel.

Arrival could be opening shop in India to sell its commercial electric van as part of its larger ambition to make electric vehicles mainstream. In January, the startup company secured a €100M investment from Hyundai Motor Company and Kia Motors Corporation.

Though there are no firm plans at the moment, India could offer great potential for companies like Arrival to come in and take the market early on. ElectricVehicleWeb.in reached out to Arrival regarding their plans for India and we were told that they have a flexible mode of manufacturing to easily enter a new market and they would consider entering the country in the long-term:

We have an exceptionally flexible and rapidly deployed mode of manufacture so that we can easily enter new markets. Additionally our ambition is to make electric vehicles mainstream for the masses which means entering as many markets as possible with solutions that match that market’s exact requirements.

An Arrival spokesperson responding to ElectricVehicleWeb in February 2020 on the possibilities of an Indian launch.

Arrival’s idea is to create a new product category that will overcome barriers generally associated with electric vehicles – cost, design and efficiency. The company is aiming to produce Generation 2.0 electric vehicles for the same price as petrol and diesel counterparts. Arrival’s autonomous ready platform has been built ground-up and is light and modular. Looking to go into full-scale production in 2021 in the commercial vehicle segment, the electric vans are supposed to have a range of up to 300 miles and a 50% reduced cost of ownership.

The investment from Hyundai and Kia will be used to accelerate the global adoption of electric vehicles in the commercial segment. Hyundai and Kia will use Arrival’s technologies and its skateboard platform to develop purpose-built electric vehicles (PBVs) in several categories. The partnership will also use Arrival’s micro-factories that are located in areas of demand for the development of the new vehicles.

Arrival is undergoing trials with several companies in addition to UPS, including DHL and Royal Mail and will be using Blackberry’s QNX SDP 7.0 operating system in the development of its autonomous-ready commercial vehicle platform.

Specific to India, Hyundai is working on the ‘Smart Electric Vehicle’ project that will result in the launch of electric vehicles in the Indian market at a price of below Rs. 10 lakh in 2023, starting with a compact SUV. The low-cost electric cars are not related to Hyundai’s partnership with Canoo or the investment in Arrival Ltd.