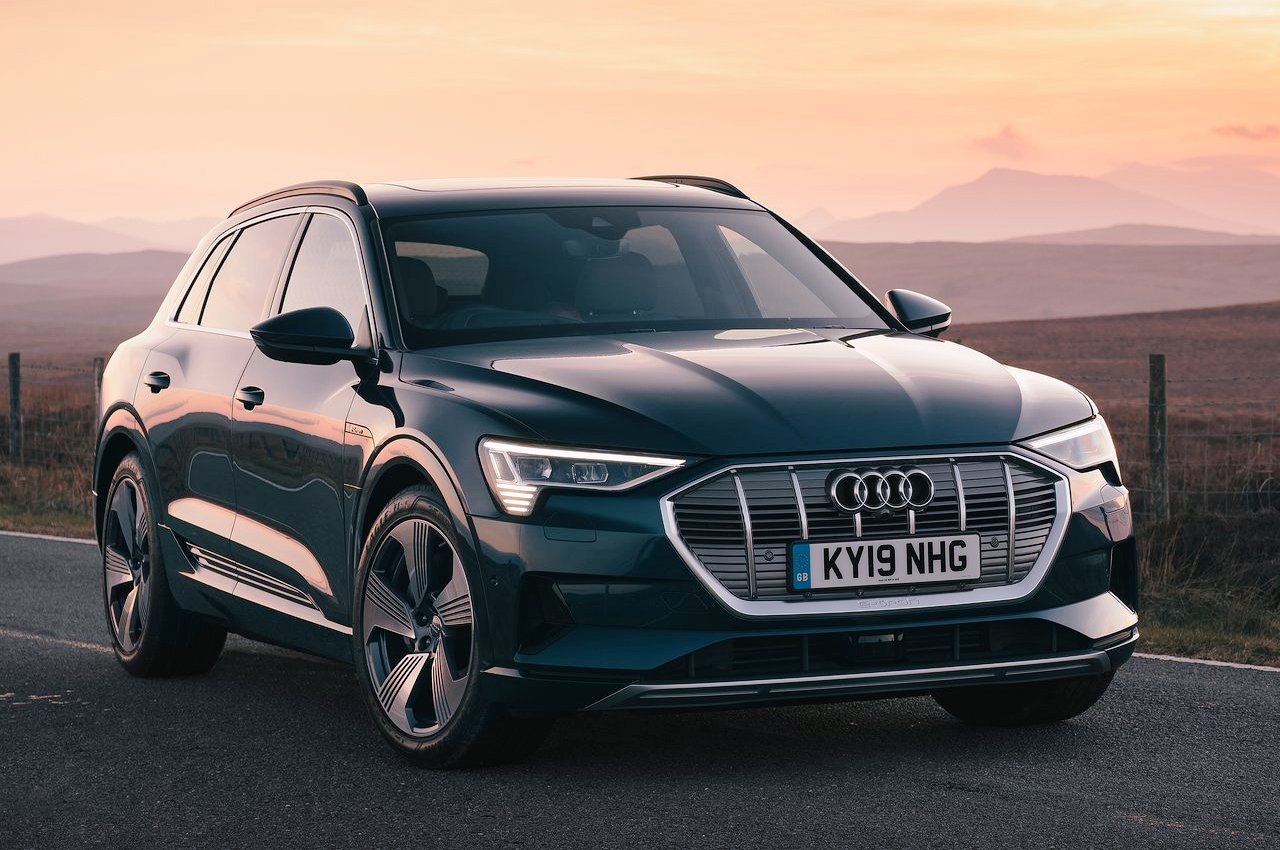 The Sportback is set apart with a design that is partly that of a coupe. The roof drops steeply at the rear and flows into the raked D-pillars. In what’s a typical Audi Sportback design attribute, the lower edge of the third side window (quarter glass) rises towards the tail section which is flat on the e-tron SUV.

The Audi e-tron Sportback gets a few other exclusives like Plasma blue metallic body paint, model-specific 21-inch wheels, and distinctive Monaco gray seat covers in Valcona leather. The interior design and technical configurations are the same as the Audi e-tron.

Audi initially expected to bring the e-tron into India around late 2019, but there have been multiple delays. During this time, the headquarters has rolled out a minor model update. It is likely that the updated model would be imported.

Late last year, the model year 2021 Audi e-tron was released internationally, and it is more convenient in daily usage.

The headline in the 2021 Audi e-tron is the optional second on-board charger that doubles the peak AC charging power from 11 kW to 22 kW. Audi has converted the standard mode 3 cable that allows charging the e-tron at a higher capacity. So, it is possible to fully charge the new electric SUV’s battery pack in just under five hours at home now. The new charging system features a 5-inch touch display and a wall mount. For its optimal usage, the company recommends a three-phase, 400-volt outlet.

The 2021 Audi e-tron is more stylish as well, thanks to the availability of 22-inch alloy wheels. The bigger wheels are painted in titanium grey and feature a five-spoke structure and a glossy finish. Inside, the EV features a new steering wheel that makes using adaptive cruise assist more convenient. The driver needs to feel the touch-sensitive rim once every minute to ensure that the lateral guidance of the driver assistance system that can keep the vehicle centered in the lane remains active.

Expect Audi India to import the latest version of the e-tron with faster AC charging and other updates available to the global market.

Balbir Singh Dhillon, the Head of Audi in India, had a chat about the Audi e-tron launch with Autocar India Editor Hormazd Sorabjee on Instagram last year. When asked about the Indian launch and the delay, he said:

First of all, I must tell you that the e-tron is coming to India, we are coming to you in the next couple of days, months or weeks to announce the timeline when we will bring e-tron into the country and we are very excited. Right now we are doing preparations for the network, training them, bringing charging centres across the network, all that work is going on right now. On why it got delayed – there was some technical release that was pending which was yet to be done, which is done now and we are just now doing the final preparation.

Earlier, it was speculated that the reason for the delay could have been an internal one, like an allocation issue from the Brussels plant, or the priority to fill up the Audi petrol crossovers variants following the activation of the BS6 regulation before importing niche products. Poor demand because of the shrinking of the luxury car market after the COVID-19 pandemic was cited. Audi would have wanted to study the response to the Mercedes EQC before locking its strategy – the EQC is the first electric car from a luxury car brand in India. However, it is clear that the delay was due to the regulation –

When asked if the delay was due to the mirrors (the e-tron has cameras in place of external mirrors), he said:

There are many, I mean the new regulations that we are seeing from time to time, every time we are planning a new product every time a new regulation comes and just pushes back the launch by another 6 months. So it’s a bit of pity but we have to live with it, only request the government and people like you whose opinions do matter to also take up these matters because we are at a tiny little volume at this point in time in the country and we need the support so that we are let to be flourished in the country.

You can catch the full discussion on Instagram.com.

There was never a doubt on the decisiveness of Audi India on the e-tron launch plan, despite repeated delays. Talking to autocarindia.com in August 2020, Hildegard Wortmann, Member of the Board of Management of Audi AG for Marketing and Sales, had reaffirmed that the Audi e-tron will be launched in India. Wortmann shed light on the company’s partially electric range in India and indicated that India will further benefit from Audi’s electrification strategy.

In an interaction with ETAuto in June 2020, via Youtube.com, Dhillon confirmed the Audi electric car had not left their minds:

Last year (2019), we showcased the Audi e-tron to touch base with our existing customers to see whether they will be interested in the car and to get their feedback on the car. This is definitely on the cards and the time is not yet frozen but e-tron is going to come to India.

I can only tell you that not just e-tron, our group is investing heavily into electric cars and you will see internationally there are lot of announcements being made that by this year we will have many electric cars. And all these options are also available for India. The government has been kind enough to allow the 2,500 cars in the import category without homologation. Eventually, if the volumes are good enough, we can start producing them locally. This is the strategy that we will use to bring more cars to the country and experiment with these cars. I’m sure these will be successful.

I think across the world, electric cars are going to be a reality. It’s only a matter of time before a country quickly adapts to these cars but I’m sure India will also have a fair share as we move on.

The Audi e-tron would be the first of many Audi electric car models to come to India. In an interview with Sorabjee on youtube.com in January, Dhillon said that the company will launch more electrified models, indicating that we could get more affordable Audi EVs like the Audi Q4 e-tron/Audi Q4 Sportback e-tron as well as higher Audi EVs like the Audi e-tron GT. The three models launch for global customers this year and could arrive in India in 2022.

We brought in this car (e-tron) to showcase to certain customers and journalists about let’s say two years back, and there was lot of enthusiasm at that point in time. As a brand, globally we are also investing heavily into electrified cars. So, definitely in the times to come, you will see many electrified cars.

The future Audi EVs in India would include more mild-hybrid models in addition to the recently launched new A4 (12V MHEV) and the A6, RS 7 Sportback, A8 L, and Q8 (48V MHEV).

When is the Audi e-tron expected to launch in India?

Audi India will launch the e-tron in India by June 2021, the company’s head has confirmed to PTI.

What will be the Audi e-tron price in India?

The Audi e-tron could cost around INR 1.1 crore (ex-showroom) in India for the launch edition.

What are the Audi e-tron competitors?

Mercedes EQC and the Jaguar I-Pace are its chief competitors.