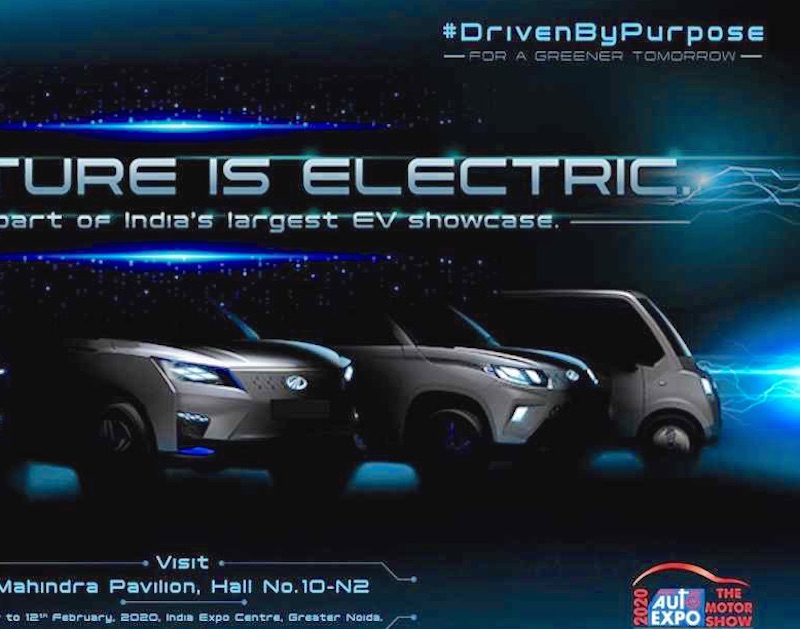 Mahindra today sent out a teaser with the outlines of its exciting line-up of models for Auto Expo 2020. Mahindra will bring three production-ready electric vehicles to the show – eKUV100, eXUV300 and Atom. Mahindra goes to the Expo with the ‘Driven by Purpose’ theme with a total of 18 vehicles that will also include a futuristic concept. More on that later.

Slated to launch in the first quarter of the next fiscal (April – June 2020), the Mahindra eKUV100 (codename: Mahindra S110) will immediately become the cheapest electric car in India with a price tag of under Rs 9 lakh ex-showroom. The KUV electric will offer a range of about 140 km and is powered by a 15.9 kWh battery driving a 40 kW motor. The car can be charged in 5 hours and 45 minutes to its full capacity through a normal plug and with a DC fast charger, it will take just 55 minutes.

To compete with the Tata Nexon EV, the eXUV300 (codename: Mahindra S210) is announced to launch in the second half of 2020 and will be offered in two range versions – standard range with 200 km and long range with 350 km. A 20 kWh battery with a 60 kW motor is expected to be part of the powertrain options, with the long-range version likely having a circa-30 kWh battery pack. The eXUV300 will use the high-spec 380V MESMA system.

The Mahindra Atom (codename: Mahindra C100) is a fresh take for solving India’s last mile mobility problems, and Mahindra’s first quadricycle. Based on a dedicated electric vehicle platform, it will compete with e-rickshaws and is expected to have a power output of less than 15 kW and a top speed of 70 km/h. The Atom, which was caught testing this month, is equipped with a swappable battery that will enable it to extend the vehicle’s range with hardly any downtime. The Atom was showcased in its concept form at the Auto Expo 2018 and the production version has the same boxy design with a wide and squat stance that has seating for 3 passenger.

Mahindra is betting big on EVs and has already earmarked an investment of Rs 1,000 crore for in EV research and development and in the company’s Bengaluru and Chakan plants.